Delhi, on the other hand, have put up such inconsistent shows that it has surprised even the most fanatic cricket followers. 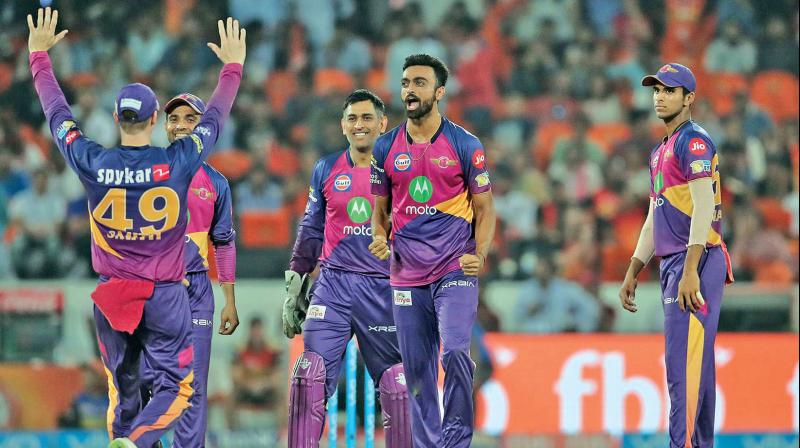 Rising Pune Supergiant will target a play-off spot when they take on Delhi Daredevils. (Photo: BCCI)

New Delhi: Rising Pune Supergiant will be targeting to secure a play-off spot against an inconsistent Delhi Daredevils in their IPL-10 penultimate group stage match here on Friday.

It has been a season of contrasting tales for these two. Pune, who began their campaign on a slow note, are all but through to play-offs with superlative performances in their last few matches.

Delhi, on the other hand, have put up such inconsistent shows that it has surprised even the most fanatic cricket followers. From recording their lowest ever IPL totals this season — twice — they have come back to chase down huge totals with standout performances from their young guns.

On Friday, when the teams come face-to-face at the Kotla here, Pune will have their task clear. A win for the visitors, third with eight wins and four losses, will put them on 18 points guaranteeing them a place in the last four stage.

They have won seven of their last eight matches and will fancy their chances against Delhi, who will draw from their dramatic two-wicket win over Gujarat Lions on Wednesday and their 97-run victory away at Pune.

“We know we will qualify if we win, but we are not looking at this game. The good thing is every player is peaking at the right time,” Pune batsman Manoj Tiwary said on Thursday.

“Delhi have won their last game. They will be coming hard at us. They have chased more than 200 here. But we are not going to make any special changes. There is no need as the team have been doing well.” Delhi have accumulated 10 points and are sixth in the standings. But inconsistency has been their bane this season. Boasting of a strong bowling line-up, they have failed to produce results at key moments so far in the tournament.

Their batting woes mirror their bowling troubles as the top and middle-order have failed to fire collectively, conceding advantage to their opponents, putting them out of play-offs contention. Home talents such as Shreyas Iyer, Karun Nair, Sanju Samson and Rishab Pant have flattered only to deceive, forcing skipper Zaheer Khan to scratch his head while trying to explain his team’s erratic performance.

Focus will be on pacer Mohammed Shami, who has been included in India’s Champions Trophy squad, but is yet to produce a convincing performance since returning from injury. Pune have no such worries and will look to replicate the form that has produced decent results so far.