Family day out for Lads

A call from Siddhesh to his father-cum-coach Dinesh changed routine despair into celebrations. 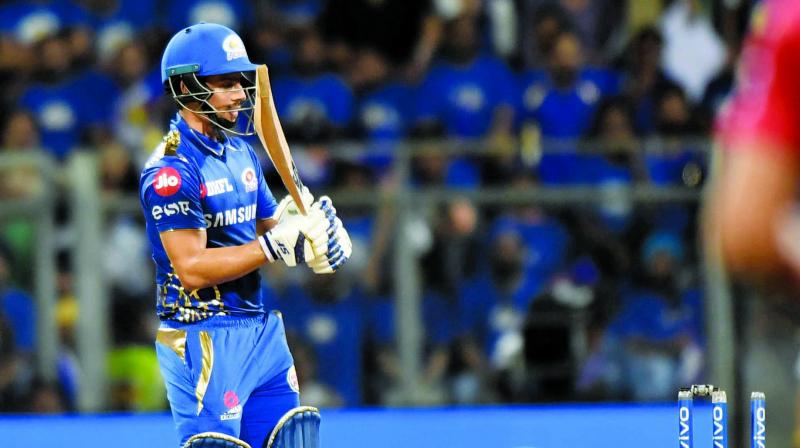 Lad family had got used to disappointments every time they saw Mumbai Indians play as their son Siddhesh Lad would be warming the bench. It rose to impatience levels when Siddhesh started performing well for Mumbai but still didn’t get an opportunity to play in IPL.

Bought in the 2015 auction along with Hardik Pandya, the wait was getting longer. Hardik and other contemporaries were not only playing in the IPL but also got their footing in the Indian team. During this time however, Siddhesh became the man of crisis for Mumbai and even led the Ranji Team this season. MI retained Siddhesh in 2018 auction.

However, after long despair the moment to rejoice finally came  on  Wednesday.

Siddhesh made his IPL debut after skipper Rohit Sharma missed the game due to injury. Dinesh Lad who is Siddhesh’s father-cum-coach got prior information about his son’s playing and they headed to Wankhede stadium.

“Siddhesh called me around noon and told me if I am coming to watch the match. I said no, he said ‘I am playing today’, I was elated and told him yes we all will come. Me, my wife, daughter and my grand daughter went to see the match. It was the moment we all were waiting for.

“He was performing well in domestic cricket in last couple of seasons in all formats. I was getting  a bit impatient as all other youngsters were playing in IPL. But he was patient enough and was keen to make IPL debut with Mumbai Indians only,” Dinesh said.

However, Rohit wasn’t the ideal man whom Dinesh wanted to sit out to make way for his son Siddhesh. After all Dinesh was Rohit’s coach in Swami Vivekanand International school, Broivali and has contributed in his rise.

“Though it was a coincidence but it wasn’t a good feeling to see Rohit sitting out due to injury. I wanted both of them to play together. But the good thing was Rohit presented him the Mumbai Indians cap,” Dinesh added.

Much before the toss between stand in skipper Kieron Pollard and Kings XI Punjab’s skipper R Ashwin, Siddhesh spoke to his team-mates in a huddle. Getting a chance after warming the bench for four seasons, he had his share of nerves but he didn’t let them to affect in the field. Knowing this is the rare opportunity he has to make count, he was overenthusiastic in the field at times, so much so that once his Mumbai team-mate, Suryakumar Yadav, indicated him to just take it easy.

He showed no nerves while batting after coming to open the innings with Quinton de Kock. He whipped his first ever delivery in IPL in to the second tear and followed by four in same area. However, the chase was big and after playing few dot balls he went hard at Mohammed Shami exposing his leg stump. Shami hit the leg stump and the 26-year-old had to walk back after making 15 runs.

“I was all over the moon when he hit that six and four. They were proper cricketing shots. But after playing few dot balls he went hard as the chase was big. If the chase was around 160 we could have seen different cricket from him,” he said.

Since the experienced Yuvraj Singhwas on the bench, Siddhesh will know that finding his place back in the playing XI will be difficult once Rohit is back. But Dinesh is optimistic it may be start of good things.

“Mumbai Indians combination has been such that middle order has been always packed and finally opportunity to open came to him. He has developed his temperament and shown focus in crisis situations during his stay with MI. He showed confidence on debut and now I hope he gets two-three more matches to grab the chance. My ultimate dream is to see him playing for India and for now he has done enough to get more chances in IPL and India A teams,” said Dinesh.