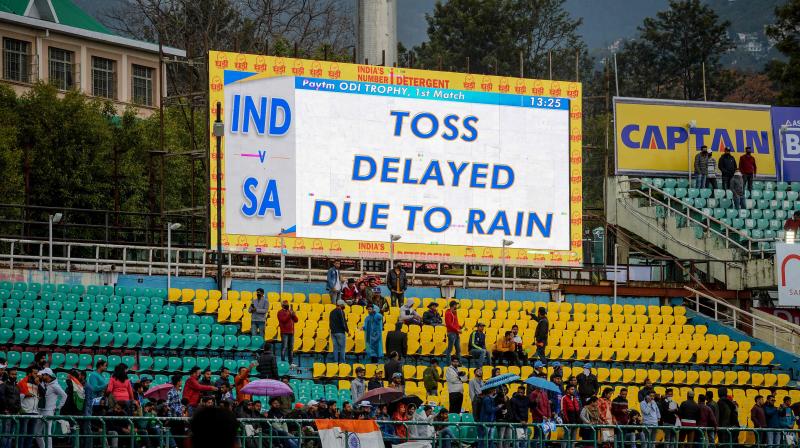 COIN THAT WAS NEVER TOSSED: A giant screen shows that announcement that toss was being delayed due to rain but it turned out that rain forced the abndonment of the first ODI between India and South Africa at Dharamsala on Thursday. AFP Photo

Dharamsala: The first ODI between India and South Africa was on Thursday abandoned without a ball being bowled due to incessant rain here.
The second ODI of the series will be played in Lucknow on March 15 while the third and final match will be in Kolkata's iconic Eden Gardens.

However, as per the Indian government's latest health advisory regarding the COVID-19 pandemic, the remaining two ODIs in Lucknow and Kolkata are expected to be played without spectators.

This latest advisory, in addition to Wednesday's travel advisory restricting entry into India until April 15, has also cast a shadow on the Indian Premier League scheduled to start on March 29. The government has advised the Board of Control for Cricket in India against staging the tournament.

The BCCI is considering holding the seven-week tournament without spectators, and is expected to make a final decision at a meeting on Saturday in Mumbai. on March 18.

It was the second match in less than six months to be abandoned at the picturesque Himachal Pradesh Cricket Association (HPCA) Stadium because of inclement weather. Incidentally, that match was also an India-South Africa clash in September last year.

The first ODI of the three-match series was always in doubt after the weatherman forecast widespread rains and thundershowers over the region on Thursday and Friday.

Heavy rain had also lashed the hill town just after the two teams' practice sessions on Wednesday, forcing the organisers to cover the entire playing area.

If that was not enough, it rained the entire night on the eve of the match.

The rain was not that heavy but was enough for water to accumulate, forcing organisers to press three super-soppers into action. The ground staff worked relentlessly but failed to clear the ground, forcing the on-field umpires to call off the match.

The cut-off time for a 20-over game was 6.30pm (IST) but the on-field umpires made their final inspection and decided to abandon the match much before that.