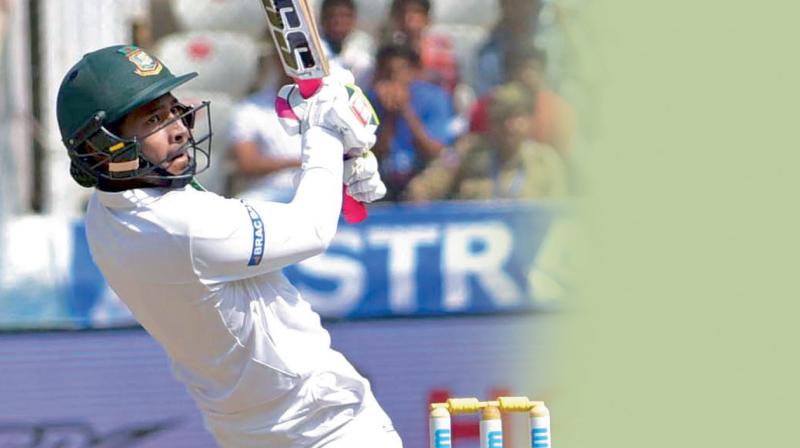 Hyderabad: Bangladesh‘s brothers in arms pulled their side out of dire straits towards respectability by the end of the third day of their one-off Test here on Saturday.

Shakib Al Hasan, captain Mushfiqur Rahim and youngster Mehedi Hasan scored a half-century each to lend respectability to the visitors first innings total at 322/6, still so far away from their opponents’ gigantic 687.

The 104 overs unfinished innings was only the second time that Bangladesh had lasted more than 100 overs against India in nine Tests — they had made 400 all out in 153 overs in Dhaka back in 2000.

Shakib (82) and Rahim (81 batting) took a tough stand and were involved in a gritty 107-run partnership for the fifth wicket after Big Brother India threatened to bully the visitors into submission early in the day. Useful associations of 45 for the fourth wicket between Shakib and Mahmudullah and 87 for the unbroken seventh between Rahim and Hasan (51 batting) too bolstered the Bangla innings at the Rajiv Gandhi International Cricket Stadium.

Shakib started shakily but gradually grew in confidence before unleashing delectable drives and showing scant respect to no.1 off-spinner R. Ashwin as he spanked him around the ground. The seasoned player stayed strong and went about his task by mixing caution with aggression. India did all they could to stop the Southpaw, throwing everything at him. They even lost a review for a caught behind decision in Ashwin’s fourth over. Shakib fell to the same bowler though, done in by the extra bounce to hole out to Umesh Yadav at mid-on as he tried to clear the field. He faced 103 deliveries during his two-and-a-half hour vigil at the wicket and smashed 14 boundaries.

Rahim was rock solid, refusing to be drawn into unwarranted aggression. He prodded and pushed around to build his innings with the patience of a sage. In fact, the Bangla captain took 21 deliveries to move from 46 to 47 even as Bangladesh lost Shakib and Sabbir during that runless Rahim period. He has so far hit 12 fours in his 206-ball knock during his four-and-a-half hour stay at the crease and looks set for more on the morrow.

Indian spinners could not get enough purchase off the wicket. While Ashwin got his only wicket in his 15th over, Ravindra Jadeja took 17 overs to activate the wicket column in his figures. It could be a different ball game on Sunday though.

On the contrary, pacer Ishant extracted considerable bounce off the strip towards close and kept Rahim on his toes, even hurting his finger with a rising delivery.

Earlier, India had to wait barely 10 minutes into the day for the second wicket, Tamim Iqbal being runout courtesy a neat throw by Umesh Yadav from the fine leg to bowler Bhuvneshwar Kumar who collected the ball cleanly and broke the stumps before the batsman could complete the second run. Tamim made a quarter century.

Captain Virat Kohli then switched the bowling ends and was immediately rewarded as Umesh trapped Mominum Haque leg before wicket for a dozen.

There was a bit of drama as well. India went for an umpire decision review after Joel Wilson adjudged Mahmudullah not out off seamer Bhuvneshwar Kumar. Replays showed the ball would have brushed the stumps but impact-wise the batsman was given the benefit of doubt and the field umpire’s call stood.

Bangla could well have been four down before lunch but for left-arm spinner Ravindra Jadeja, who could not close his fingers around a powerfully hit shot by Shakib Al Hasan off his own bowling.

The visitors lost another wicket, and a review, as Mahmudullah (28) fell lbw to Ishant Sharma with umpire Wilson’s decision again standing.