After a second ball duck in his debut Test innings, Labuschagne has scored 1459 runs in just 14 Tests. 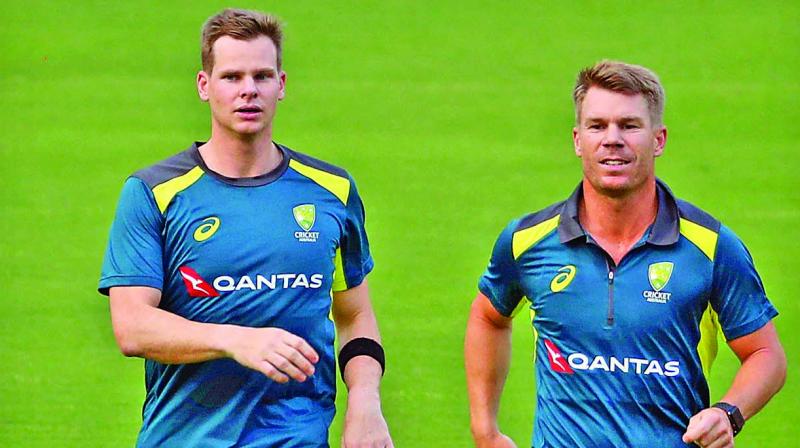 Steve Smith and David Warner during a training session in Mumbai. (Photo: AP)

How new batting sensation Marnus Labuschagne squares up to the Indian bowling attack, particularly Jasprit Bumrah, is being pitched as the major attraction in the ODI series against Australia that begins next week. For good reason too.

Labuschagne’s rise in international cricket in the last six months has been meteoric. Part of the Ashes squad, he looked destined to be on the reserves bench for a long while when he got an unexpected lifeline thanks to the newly adopted rule on substitution in Test cricket.

Maestro Steve Smith got hit on the head in the second Ashes match at Lord’s. Labuschagne replaced him to bat in the second innings, made a gritty half-century that saved Australia from defeat, and he’s not looked back since.

After a second ball duck in his debut Test innings, Labuschagne has scored 1459 runs in just 14 Tests. His form since his recall to the Test side in the Ashes series has been Bradmanesque, to use a cliché. So much so that he’s upstaged both Smith and Warner in this period.

But while he’s been brilliant in Tests, will Labuschagne be as prolific in ODIs? Particularly on Indian pitches, and more particularly against Jasprit Bumrah who retains his no.1 spot in the ICC rankings in this format despite not having played a single match since the World Cup?

Bumrah returned to international cricket in the T20 series against Sri Lanka. There were some concerns whether the long lay off would have had adverse effect on him, but he didn’t look any the worse for the injury that kept him out of cricket for six months or so.

Hot pace, daunting line and length, steep bounce and clever variations, which saw Bumrah become the world’s leading fast bowler were quickly on display, much to the relief of not just fans but also the selectors and team management.

However, the stiffer test for Bumrah will come against Australia. Sri Lanka, by body language and performance, were stragglers, almost doomed to defeat. Frankly, without taking away anything from the emphatic victories at home this season, India haven’t really been stretched.

South Africa are in makeover mode and impoverished of talent when here, Bangladesh were hit by controversy surrounding major domo Shakib Al Hasan who missed the tour (along with injured Tamim Iqbal), and Sri Lanka, as mentioned, were there in body, but not in mind.

All three teams were easy meat for Virat Kohli’s team, ravenous for success. An Australia side brimming with confidence after a fine home season will be a far, far tougher challenge. Given the talent on view, in fact, it should whet the appetite of every cricket lover.

Both teams are star-studded and in terrific form. Think Rohit, Kohli, Rahul, Pant, Shami, Kuldeep/Chahal pitched against Finch, Warner, Smith, Starc, Cummins. No, I haven’t overlooked Bumrah versus Labuschagne, but that only represents the exciting contest ahead.

This series, of course, will be played against the backdrop of a meeting (or several of them) between the administrators of BCCI and Cricket Australia. Given the issue uppermost on the agenda — whether Test cricket should be played over five days or four — is likely to overwhelm the on-field action.

CA chief executive Kevin Roberts is scheduled to discuss with BCCI President Sourav Ganguly the feasibility of reducing Test matches to four days (which Cricket Australia ostensibly supports) even as debate rages all over the cricket world.

This debate is not new. The issue has dogged Test cricket ever since it came into existence. Test matches of different tenures have been played in the long history of the sport as administrators looked to keep fans engaged.

Cricket’s longest format has suffered erosion in spectatorship (hence sponsorship and interest of broadcasters) continuously for decades. How to arrest this has been the challenge, which has currently become the talking point all over as more and more players, especially the big names (current and retired) have also voiced their opinion.

There is no easy solution that the ICC’s Technical Committee can pick on when it meets to address the issue.

What’s becoming clear, however, is that some changes — irrespective of the tenure of the match —may be necessary for Test cricket to survive the Tsunami of T20.