Dhawan sustained a deep gash on his knee during a Syed Mushtaq Ali Trophy game and was subsequently ruled out of the three-match T20 series. 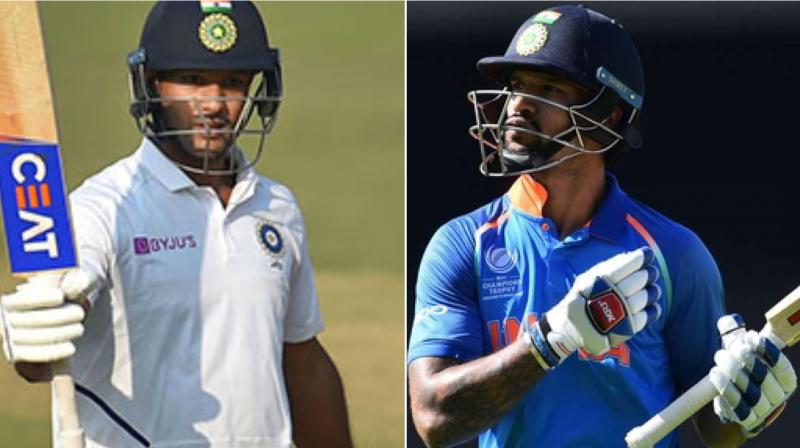 India's Test opener Mayank Agarwal is likely to replace Shikhar Dhawan in the upcoming three-match ODI series against the West Indies after the senior batsman failed to recover from his knee injury. (Photo:AFP)

New Delhi: India's Test opener Mayank Agarwal is likely to replace Shikhar Dhawan in the upcoming three-match ODI series against the West Indies after the senior batsman failed to recover from his knee injury.

Dhawan sustained a deep gash on his knee during a Syed Mushtaq Ali Trophy game and was subsequently ruled out of the three-match T20 series where Sanju Samson came in as a replacement.

It was expected that the 34-year-old Dhawan would recover from the injury but it seems more serious than what was apprehended earlier.

"The selection committee has recommended Mayank's name as Shikhar's replacement after consultation with the team management. Dhawan is currently undergoing rehabilitation," a senior BCCI source told PTI on conditions of anonymity.

Mayank, who is currently playing Ranji Trophy match against Tamil Nadu in Dindigul, will join the national team in Chennai before the first game.

That the team management is keen on Mayank translating his stupendous Test performance into the ODI arena was first reported by PTI on November 18.

However, with in-form KL Rahul also in the ODI side to partner vice-captain Rohit Sharma, Mayank may have to wait for his white-ball debut unless someone gets injured.

Agarwal had earlier come in as a late replacement for injured Vijay Shankar during the ODI World Cup in England but he didn't get any game time.

The 28-year-old Bengaluru man has been a revelation in the Test arena with 872 runs in 9 Tests matches including three centuries and three half-centuries at an average of over 67.

"Mayank along with Prithvi Shaw and Shubman Gill were the three choices that selection committee had. But team management believes that Mayank's List A record of 50 plus average and 100 plus strike rate with 13 hundreds is good enough to try him out in this format," the source added.

The team management's rationale is that they don't see Dhawan as a long-term investment going into 2023 ODI World Cup when he would be 37 years old.

"It is time that we create a pool of openers and look at all the potential options who could partner Rohit," a source privy to functioning of the team management, said.

The break could be a blessing in disguise for Dhawan as he will get a chance to get back to domestic cricket and find some form which has eluded him for the last few months.

Dhawan had a prolonged bad patch since the start of India's away series against the West Indies after he had to comeback from World Cup due to thumb fracture.