Kohli’s 15th Test ton put India ahead on a day of keen contests between bat and ball where fortunes fluctuated at the Wankhede Stadium. 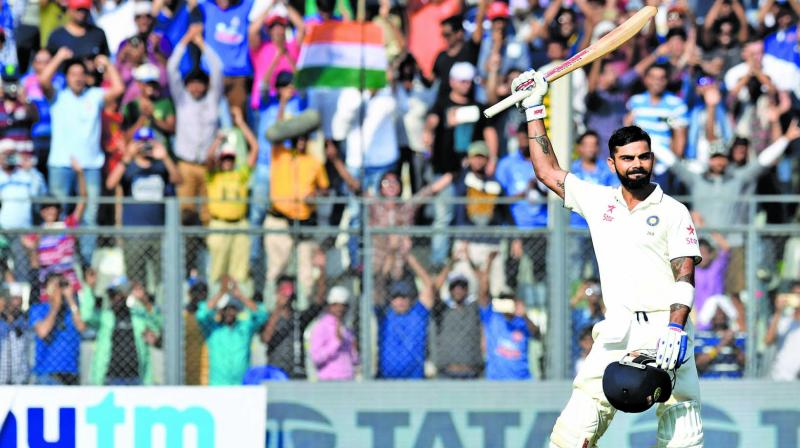 Captain Virat Kohli celebrates his century on the third day of the fourth Test against England. (Photo: Rajesh Jadhav)

Mumbai: Skipper Virat Kohli underlined his best-batsman-in-the-world status, scoring an authoritative century (147 not out), to power India to 451/7 and a handy 51-run first innings lead over England at stumps on the third day of the fourth Test here on Saturday.

Kohli’s classy hundred was preceded by opener Murali Vijay’s second century of the series, a finely crafted 136; which laid a solid foundation for India’s response to England’s 400.

Kohli’s 15th Test ton put India ahead on a day of keen contests between bat and ball where fortunes fluctuated at the Wankhede Stadium. Enroute, the 28-year-old completed 1,000 Test runs in 2016, crossed the 4,000-run mark and also became only the fifth Indian to score over 500 runs in a Test series against England. England got a boost right at the beginning, when Jake Ball dismissed Cheteshwar Pujara on his overnight score of 47 off the second ball of the day.

Kohli and Vijay then stitched together a 116-run third wicket stand to consolidate the home team’s position. But their good work threatened to go down the drain following the Tamil Nadu batsman’s dismissal in the second session.

He found able company in Ravindra Jadeja, who contributed 25 here to follow a 90 in the Mohali Test. The two added 57 runs in a crucial seventh wicket partnership.

Jadeja was dismissed with India still trailing by 36 runs. But Kohli found another ally in Jayant Yadav (batting 30), and they have so far posted an unbeaten 87-run stand for the eighth wicket.

England’s spinners bowled their socks off but were let down by two missed chances, Kohli on 68 and Yadav on eight, which potentially could decide the fate of the contest.Although England spinners bowled tirelessly, a couple of dropped catches; including one of Kohli’s; did not help England’s cause.

While Root, during his press conference after stumps, said that England would look to claim the remaining Indian wickets quickly on Sunday, Kohli’s second hundred in the series has strengthened India’s position in the Test.