Chahar recorded the best bowling figures in a T20I match and he also became the first Indian to take a hat-trick in T20Is. 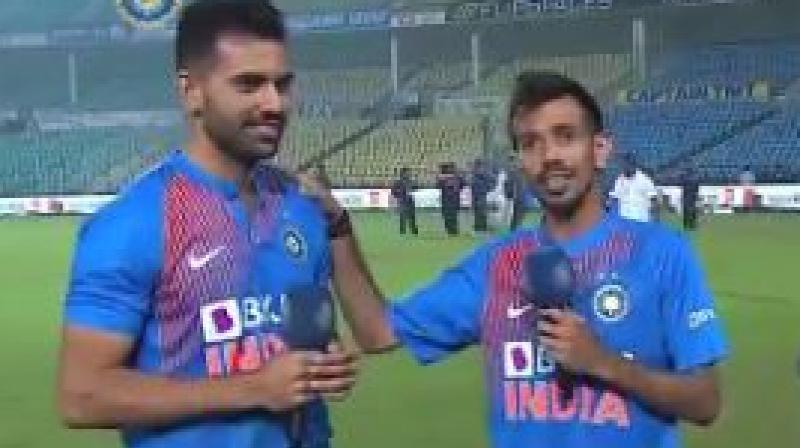 BCCI shared a video on Twitter in which Deepak Chahar and Shreyas Iyer can be seen talking to the Yuzvendra Chahal on his talk-show 'Chahal TV'. (Photo: Twitter/ BCCI)

Chahar recorded the best bowling figures in a T20I match and he also became the first Indian to take a hat-trick in the shortest format of the game.

Board of Control for Cricket in India shared a video on Twitter in which Chahar and Shreyas Iyer can be seen talking to the leg spinner on his talk-show 'Chahal TV'.

WATCH: Hat-trick of sixes, Hat-trick of wickets & a card trick to top it up. This is yet another Chahal TV special. 😎😎 @deepak_chahar9 @ShreyasIyer15 @yuzi_chahal - by @28anand

Chahar ended the match with the figures of 6-7 and he surpassed Sri Lanka's Ajantha Mendis to create the record.

The pacer dismissed one batsman on the last ball of the 18th over and then he dismissed two batsmen in the opening two balls of the 20th over.

"I didn't realize that I have taken the hat-trick, it's a nice feeling to know that," said Chahar in the video.

Iyer provided the much-needed support to KL Rahul while batting. The duo mixed caution and aggression to keep the scoreboard ticking.

Iyer did not allow Bangladesh to get momentum on their side as he kept on hitting big shots off the bowling of spinners. The right-handed batsman also smashed three consecutive sixes in an over.

"I thought of hitting six sixes in an over, but the bowler bowled a wide yorker," said Iyer.

"Any batsman would have thought to hit six sixes in an over after hitting the first three-ball out of the park," he added.

India defeated Bangladesh by 30 runs on Sunday to win the three-match series 2-1. Chasing 175 for the win, Bangladesh was bundled out for 144.

India and Bangladesh now take on each other in a two-match Test series. The first match will be played from November 14-18.