What is Deepak Chahar's plan for the 2020 T20 World Cup? He reveals

His performance against Bangladesh has prompted calls for him being in the squad for the 2020 T20 World Cup. 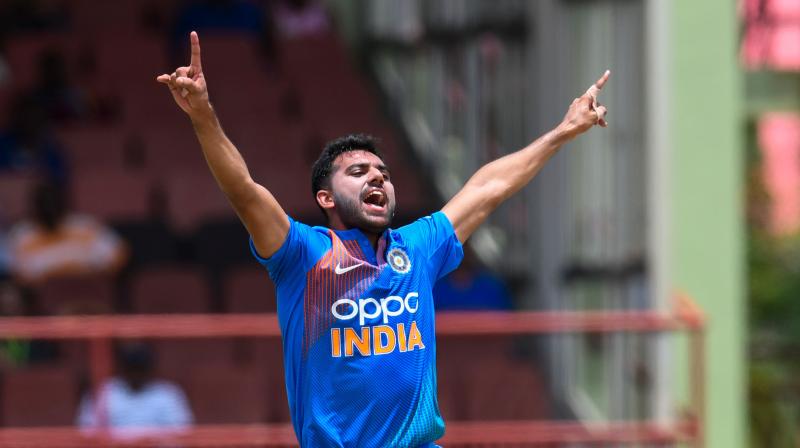 Indian pacer Deepak Chahar’s journey has been an incredible one and Sunday night’s performance has been the epitome of his career until now. (Photo: AFP)

Mumbai: Indian pacer Deepak Chahar’s journey has been an incredible one and Sunday night’s performance has been the epitome of his career until now. He created a record for the best bowling figures in a T20I match and he also became the first Indian to take a hat-trick in the shortest format of the game.

This performance of his has prompted calls for him being in the squad for the 2020 T20 World Cup. Fans have been clamouring for Chahar’s inclusion in that squad alongside Jasprit Bumrah and Bhuvneshwar Kumar.

Speaking to IANS on the same, Deepak said, “World T20 is about 11 months away and that is a long time. Obviously I have that in the mind and we are looking to win the trophy, but as a sportsman, you can’t think so far as there is a lot of international cricket before that as well as the IPL.”

Highlighting his gameplan, he said, “I want to gain more trust from the management till then and there will be times where I will get hit and I want to still gain the trust of the team so that they support me. Performing in every match is the goal.”

He added, “I take every game as the last as the competition is very high and the fast bowling unit is doing really well. Cementing your place in this team is very tough, so I look to perform every time I get an opportunity.”

With his performance in the T20I series against Bangladesh and winning the Man of the Series award, Deepak Chahar has surely made his point as one of the frontrunners in the race for the inclusion in 2020 T20 squad.