At one point it seemed that Mithun and Naim would make matters simple for Bangladesh and would deliver them across the line. 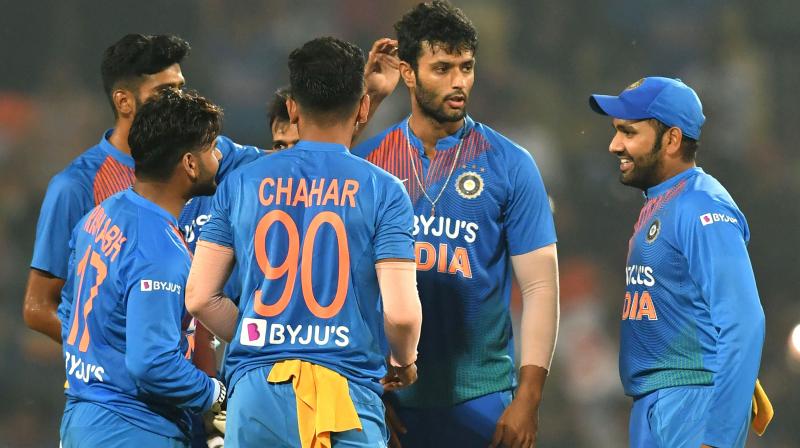 Team India was feeling the pressure imposed by the duo, and it was at that time that Captain Rohit Sharma calmed their nerves. (Photo: AFP)

Mumbai: India turned out to winners in a thrilling match against Bangladesh in the third and final match of the T20 series. India managed to post a competitive score of 174 at the loss of five wickets. Iyer was one of the main architects of the score as his score of 62 from 33 balls helped his team to get to a respectable total. Deepak Chahar added the finishing touches to the demolition of the Bangladeshi batting lineup with his six-wicket haul.

But not everything was smooth sailing for India as after Bangladesh lost their first two wickets, the duo of Mohammad Mithun and Mohammad Naim proved to be a headache for the Indian bowlers. It seemed that Mithun and Naim would make matters simple for Bangladesh and would deliver them across the line. Team India was feeling the pressure imposed by the duo, and it was at that time that Captain Rohit Sharma calmed their nerves.

Shreyas Iyer in a press conference after the match revealed that when the duo was getting on the nerves of the Indian fielders, India’s stand-in captain, Rohit Sharma, called in a team huddle and spoke a few words of confidence, which enforced their belief in themselves.

“We were feeling the pressure. We know that they are a really good team. There's no team in T20 that we can underestimate. And in the previous two games we have seen that the quality of cricket they have been playing was really mesmerising,” Shreyas Iyer told to NDTV during the press conference.

"We were going a little lethargic at the start, but once they started going, Rohit called all the players inside the circle and he gave us a pep talk, which was really motivating. After that we were all determined to win the game," he added.

Speaking on his 62-run inning in the third T20I, he said, “The over in which I hit three sixes changed the momentum of the match. Otherwise, we would have got 150 and that would have been a really tough total too difficult on this wicket. Yeah, I would give myself credit, playing that role. It was important for one of the top three batters to stay at the crease till the 15th over.”