He achieved the feat in the ongoing final T20I of the three-match series at the Vidharba Cricket Association Stadium. 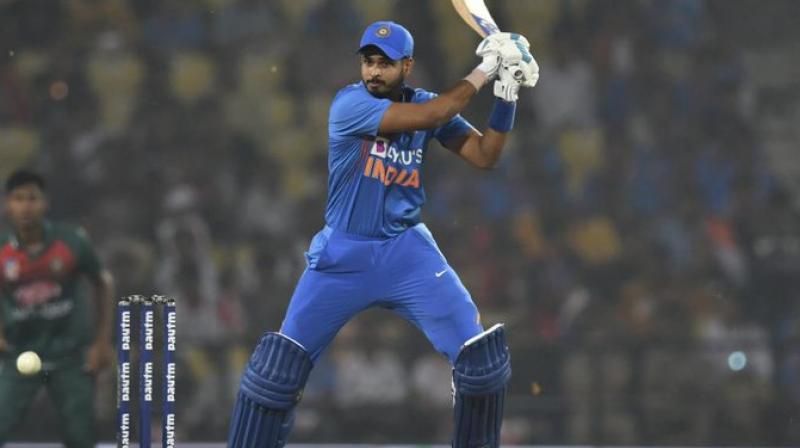 India batsman Shreyas Iyer on Sunday registered his maiden half-century in the T20I format against Bangladesh. He went on to play a knock of 62 runs off just 33 balls. (Photo:ICC/Twitter)

He achieved the feat in the ongoing final T20I of the three-match series against Bangladesh at the Vidharba Cricket Association Stadium here.

Bangladesh won the toss and chose to bowl first.

Iyer came in to bat at a score of 35/2 and displayed an aggressive style of play from the very start to allow India to register runs at a good run-rate.

Iyer was finally dismissed in the 17th over by Soumya Sarkar. He went on to play a knock of 62 runs off just 33 balls.

India got off to the worst start possible as skipper Rohit Sharma (2) was sent back to the pavilion in the second over of the innings.

KL Rahul and Shikhar Dhawan then put on a brief 32-run stand, but their resistance was cut short by Shafiul Islam as he dismissed Dhawan (19), reducing India to 35/2.

Iyer came out to bat and he provided much-needed support to Rahul at the other end. The duo mixed caution and aggression to keep the scoreboard ticking. Rahul brought up his fifty in the 12th over of the innings.

Iyer and Rahul put up a 59-run partnership, but immediately after reaching his half-century, Rahul (52) was sent back to the pavilion in the 13th over by Al-Amin Hossain, reducing India to 94/3.

However, Iyer did not allow Bangladesh to get momentum on their side as he kept on hitting big shots off the bowling of spinners. The right-handed Iyer brought up his maiden half-century in the 15th over.

Wicket-keeper batsman Rishabh Pant (6), once again failed to leave a mark with the bat as he was clean bowled by Soumya Sarkar in the 16th over.

Manish Pandey played some big shots in the final overs to take India's total past the 170-run mark.

While filing this story, India had posted a score of 174/5 in the allotted twenty overs.