The 15-year-old Shafali continued her impressive run by scoring a quick-fire 69 off 35 balls alongside Smriti Mandhana (30). 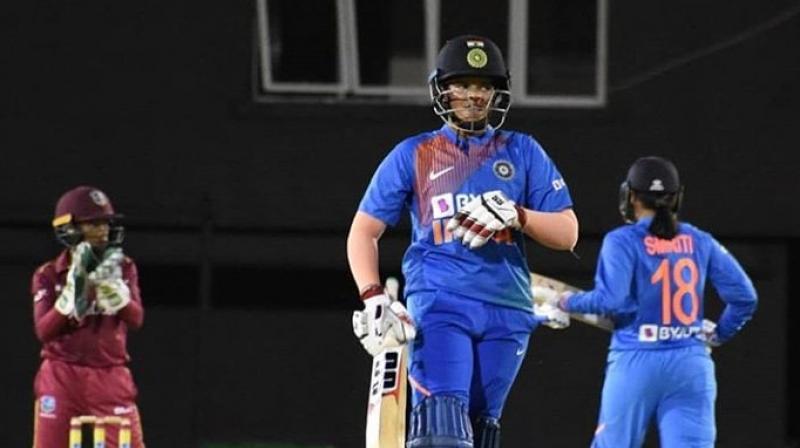 The 15-year-old Shafali continued her impressive run by scoring a quick-fire 69 off 35 balls alongside Smriti Mandhana (30). The duo powered India to a 2-0 lead in the five-match series on Sunday night.

Shafali, who overtook the iconic Sachin Tendulkar to become the youngest Indian cricketer to score a half-century in international cricket, displayed scintillating form yet again and smashed 10 fours and two sixes.

Earlier, the Indian bowlers, led by Deepti, who registered career-best figures of 4 for 10, managed to restrict the West Indies for a paltry 103 for seven in the stipulated 20 overs.

Opting to bat, the West Indies openers struggled to get going. Pacer Shikha Pandey drew first blood for India when she dismissed Stacy-Ann King (7) in the fourth over.

Wicketkeeper Shemaine Campbelle soon followed after Radha Yadav (1/20) had her stumped for a duck.

Opener Hayley Mathews (23) and Chedean Nations (32) tried to resurrect the West Indies innings but could only manage a 32-run stand as pacer Pooja Vastrakar(1/23) dismissed the former.

However, the West Indies were unable to get any kind of momentum going as wickets kept tumbling. Deepti accounted for the four wickets in the last four overs.

Later Shafali and Mandhana, who had also smashed a half-century in the series-opener, played second fiddle to the teenager. The 23-year-old's innings was laced with four boundaries.

West Indies captain Anisa Mohammed had no answer to the Indian duo and used seven bowlers, including herself, with no success.

The combined effort saw India reach their target in 10.3 overs.

The third T20I will be played at Providence Stadium in Guyana on November 14.