Sports   Cricket  11 Nov 2019  Got heads up from team management that I am designated No 4, says Shreyas Iyer
Sports, Cricket

Got heads up from team management that I am designated No 4, says Shreyas Iyer

Iyer will have to be one of the 'finishers' in case team's top two batsmen skipper Virat Kohli and deputy Rohit Sharma get out cheaply. 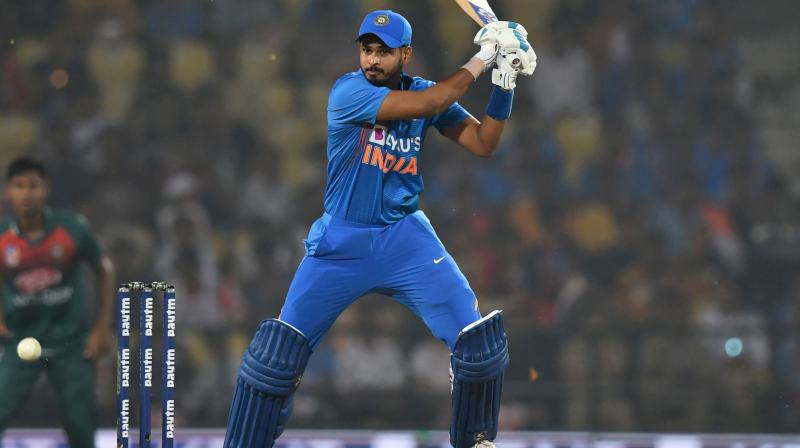 The talented Shreyas Iyer has been given a 'heads up' by the Indian team management that he will be the designated No 4 batsman in white-ball format after a string of impressive performances in the past few months. (Photo:AFP)

Nagpur: The talented Shreyas Iyer has been given a "heads up" by the Indian team management that he will be the designated No 4 batsman in white-ball format after a string of impressive performances in the past few months.

India tried umpteen players at the number four spot in the lead up to the 50-over World Cup but none of them could cement their place in the team and it was used as a floating position during the mega event as the experiment with Vijay Shankar falling flat.

For me personally, they (team management) have given me a heads up that 'You'll be there at No.4. So just back yourself and believe in yourself'," Iyer, who smashed 62 off 33 balls including five sixes in the T20 series decider against Bangladesh, told mediapersons after the match.

"It has been a really important last few series for me to set the benchmark at the No. 4 position, which all of us are competing for at the moment," said Iyer, who scored a couple of half-centuries batting at No 5 in the ODIs against the West Indies.

Iyer will have to be one of the "finishers" in case team's top two batsmen skipper Virat Kohli and deputy Rohit Sharma are dismissed cheaply.

"Even if Kohli and Rohit get out, we need someone to finish the game and bat till the end.' That is a No. 4's role. That's what I was trying to replicate today and it worked out really well for me," said the 24-year-old, who has overcome the disappointment of missing out on ODI World Cup berth.

Asked how significant his knock was considering that team is trying out fringe players like him ahead of the World T20 next year, Iyer said: Yes, obviously there is lot of competition going in the team. I personally feel that I compete with myself. I don't want myself to be judged with anyone or when you say that this position is empty in the team.

While he will be batting at number four for some time now, Iyer is flexible and ready to bat at any position that the team wants him to.

"I am really open-minded and can bat at any number. So I just like to back myself in tough situations and today's innings showed that I can bat under pressure as well.

In the final T20, Iyer went ballistic after being cautious at the beginning. Four of his five sixes came against the spinners and his knock allowed India to put up a defendable 174 for five.

"The support staff have given me the freedom -- not just me but all the batsmen -- that you need to have that intent when you go in there. And you should feel very positive when you're batting. If the ball pitches in my area, I am not going to control myself. I'll bat according to my instincts."

Iyer was dropped on 0 and if it wasn't for his innings, India would have struggled to reach 160. With the dew setting in the evening, it would have been a tough total to defend. The Mumbai batsman said it was one of the turning points of the game.

"The over in which I got three sixes shifted the momentum in our favour otherwise we would have finished with 150 of 155.

"It would have been a really tough to defend that total on this wicket where there was a lot of dew and pitch was getting better for batting. I would really give myself credit and also KL Rahul for the way he gave us the start," said Iyer.

According to him, the other major moments of the game were Deepak Chahar, who took a record breaking six-wicket haul including a hat-trick, taking two wickets in his first over and rookie Shivam Dube dismissing a well set Mohammad Naim and Afif Hossain off consecutive balls in the 16th over.

Iyer admitted that India were feeling the pressure when Bangladesh were going strong at 110 for two in the 13th over, chasing 175.

"We were going a little bit lethargic I would say at the start and once they got going Rohit recalled all the players inside the circle and gave us a pep talk, which was really motivating and after that we were really determined to win the game."

Iyer added that dew was much heavier in Nagpur than Rajkot and Delhi.

Talking about Chahar, who did not open the bowling and instead bowled more in the second half of Bangladesh innings, Iyer said:"I was also really surprised when we didn't start with him. I was actually asking one of our teammates at that point.

"It worked out for Deepak, coming in and picking up two wickets at a crucial time. He's been playing for so many years now. He's gained experience, and I feel he's a very confident lad. Currently, he's one of the main bowlers in the team."