Vengsarkar and More back Rohit Sharma as Test opener

One problem that the team could face in starting with Rohit Sharma in Tests is his earlier form in red-ball cricket. 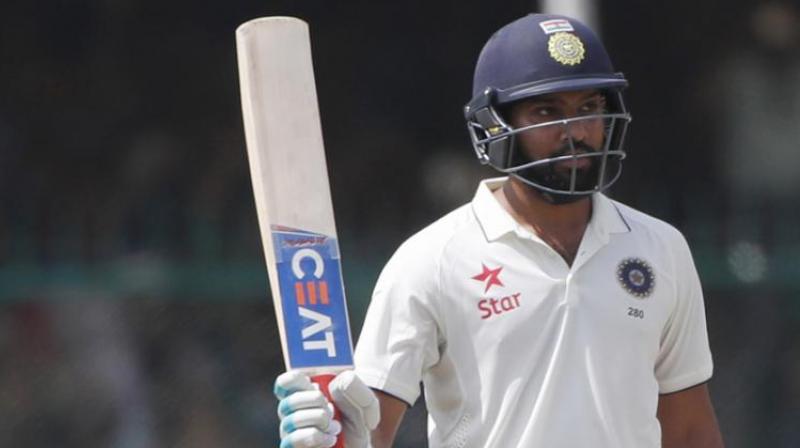 In his 27-match Test career, Rohit Sharma has managed 1585 runs at 39.62 with three hundreds and ten fifties to his name. (Photo: AFP)

Mumbai: Former cricketer, Dilip Vengsarkar, who has also been the national selector, has stated that a proven world-class player like Rohit Sharma will succeed in Tests. He also went on to state him as a big-match player.

Kiran More, too, stated that Rohit Sharma should get a shot at Test cricket after a string of stellar performances in limited-over cricket. He also said that Rohit could bat at any position and is a great asset.

Speaking to Mid-Day, Vengsarkar said, “He is a world-class player and has proved it. Give him a platform, and he will perform. He delivered when the whole world was watching during his innings [of 140] against Pakistan in the World Cup. He is a big-match player, so I am sure he will succeed.”

He also went to add that leaving Rohit Sharma from the Test team came as a surprise to him. He said, “Leaving a player like Rohit out of the playing XI was very surprising. He is a world-class player. Would the team management have dropped him if we were playing a strong team like England or Australia? “After scoring five centuries in the World Cup and being in such great form, it was unfair to leave him out of the playing XI. We don’t know why he was dropped.”

Kiran More too, told Mid-Day that, “Rohit can be part of the team’s XI anytime. He can bat at any position. He has the experience of opening [in limited overs]. It is a great asset for the Indian team that a player of his calibre is sitting out. It will be great to have him in the XI.”

One problem that the team could face in starting with Rohit Sharma in Tests is his earlier form in red-ball cricket. He isn’t a regular in Tests for India due to his poor showing early on. That was the same reason why he was dropped as a Test opener and demoted to the middle-order.

In his 27-match Test career, Sharma has managed 1585 runs at 39.62 with three hundreds and ten fifties to his name.

Sharma’s Test record at home is marvellous, having scored 769 runs in just nine matches which included three centuries at a stupendous average of 85.44. But, it is his overseas statistics which keeps him down. He has an average of just 26.72 and has scored only 816 runs in 18 Tests.

But, Rohit Sharma is probably in the best form of his life and not taking advantage of it would be an act of foolishness. Taking in Sharma as a middle-order batsman for Tests wouldn’t make sense because of the recently discovered gold-mine known as Hanuma Vihari. So, the only place left that can be modified is that of the opener.