India held Qatar to a goalless draw in the qualifying tournament for the FIFA World Cup 2022 and AFC Asian Cup China 2023. 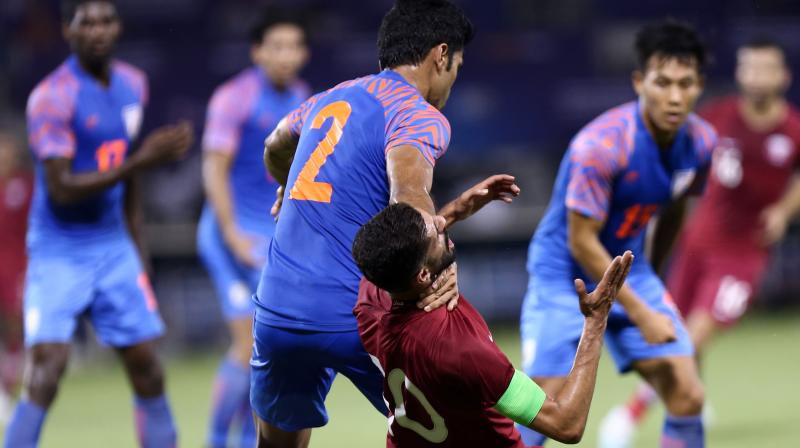 Stimac who coached Croatia to qualify for the FIFA World Cup Brazil 2014 took charge of the Blue Tigers in May 2019. (Photo: AFP)

Doha: After India restricted Asian champions Qatar to a goalless draw, that too in an away match, the players in unison credited the result to current head coach of the Indian football team Igor Stimac on Wednesday.

Stimac who coached Croatia to qualify for the FIFA World Cup Brazil 2014 took charge of the Blue Tigers in May 2019, while as a player, he was part of the golden generation of Croatian squad which finished third in the FIFA World Cup 1998.

Mandar Rao Desai credited Stimac for bringing back the 'positive vibes' in the dressing room which made a 'great difference'.

"The coach did a lot of research on the opponents and gave us a lot of short videos to watch, and prepare. We watched them perhaps a million times. At every step, he was there to guide us," Desai said.

"After the Oman result, it was not easy to play against Qatar. However, Coach motivated us all the time. He brought in a lot of positivity which was so crucial as everyone was low on morale. That's what good coaches are capable of - lifting up the spirits with their belief, and confidence," he added.

Current AIFF Men's Emerging Footballer of the Year 2018-19 Abdul Sahal, who was omnipresent in the midfield initiating, and intercepting stated 'we played as a team'.

"This is quite unbelievable. All the boys are really happy for the coach. He has brought in a lot of changes to our game. We understand we have to do more, and we will surely do more," Sahal said.

"We defended well in the first half. That was important as we were facing the best team in Asia. At the interval, the coach told us to come out and attack, and enjoy our football. That motivated us further. We played it around, and stretched them while maintaining our shape all throughout," he added.

Midfielder Anirudh Thapa highlighted the result as the 'most memorable moment for him in his career in an Indian jersey'.

"This has to rank at the top. Qatar are an extraordinary side and this was a qualifier match as well which makes the result even sweeter for us. I'm glad that we could come here to their home and return with points," Thapa said.

"The coach has changed everything - things we do on and off the pitch. We are all so happy for him. I am happy we were able to make him proud of our performance. He guided, and helped us to achieve this," he added.

Central defender Adil Khan, who led by example couldn't hide his emotions while looking back at the match.

"Playing a team as strong as Qatar who have won all their matches against Asian sides in 2019, and not conceding a goal is special. The credit for the result goes to the entire team," Khan said.

"Stimac is building a good team. We are making good progress under him. I hope more and more fans start believing in him after this performance. I can't control my emotions. I am getting goosebumps even thinking of the result. The self-belief in the team defines everything," he added.

India held Qatar to a goalless draw in the qualifying tournament for the FIFA World Cup 2022 and AFC Asian Cup China 2023.

The Blue Tigers will next face Bangladesh in the tournament on October 15.