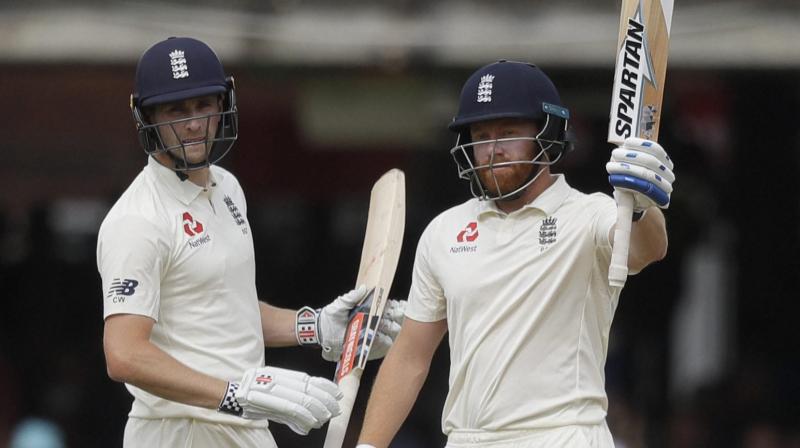 Chris Woakes (120*) and Jonny Bairstow (93) have put India on the mat and pushed the hosts in a position from where they can go on to win the Test to take 2-0 lead in the five-match series. (Photo: AP)

London: It’s advantage England as Chris Woakes (120*) and Jonny Bairstow (93) have put India on the mat and pushed the hosts in a position from where they can go on to win the Test to take 2-0 lead in the five-match series after securing 250–run lead, with four wickets still in hand, on Day three of the second Test here at the Lord’s on Saturday. England ended Day three at 357/6 before bad light stopped play

While India’s poor batting show amidst intermittent rain on Day two had put England in the driver’s seat, England were in a spot of bother having reduced to 131/5 with the likes of Keaton Jennings, Alastair Cook, Olie Pope, Joe Root and Jos Buttler back in the dressing room.

However, England turned the tide with Bairstow-Woakes 189-run stand which saw the England all-rounder scoring a hundred and the wicketkeeper-batsman scoring 93. Woakes, who replaced Ben Stokes in England’s playing XI for this Test, joined Bairstow after England lost Buttler in the second session on Day three.

The Warwickshire all-rounder, who had scalped two wickets on Day  two, continued his fine show in this game as he brought up his first Test ton to deny India a chance to make a comeback into this game.

Before lunch, Shami had kept India alive in the game as he reduced England to 89/4 before lunch.

WICKET! Finally. Jonny Bairstow misses out on a hundred as a flying Dinesh Karthik takes a fine catch off Hardik Pandya to give India their sixth wicket and break the 189-run stand.

HUNDRED! What a game Chris Woakes is having! Yesterday, he starred with the ball and now a ton! He has put India on the mat. England's lead has crossed 200 mark and India are pretty much out of this game.

WICKET! Shami is India's go-to-guy! Jos Buttler's shimmy does not help as Shami keeps it full and more importantly into the line of the stumps. Buttler out LBW. England 5 down.

WICKET! Got him! That's wrap on the pads and Mohammed Shami has given India a big wicket right at the stroke of the lunch! England have no reviews left. But anyway, that would have been out.

WICKET! Olie Pope takes a review but that's out. England have lost their reviews and their third wicket. The ball was hitting the stumps. Hardik Pandya, who has failed to find any consistency, has still managed to get a wicket. England three down.

WICKET! Ishant Sharma joins the party, removes Alastair Cook for 21 runs who was looking good. The around the wicket, onto the middle and moving away delivery does the trick. Cook edges it and Dinesh Karthik pouches it. England 2 down.

WICKET! Keaton Jennings has been trapped by Mohammed Shami. It was an lbw, there was no inside edge into the pad. Jennings opted for a review but no luck. England 1 down and have lost a review.

Virat Kohli and co will look for early wickets on Saturday as the second England-India Test match enters its third day.

On a rain-curtailed second day, it was a Cheteshwar Pujara run-out that cost the visitors dearly, as James Anderson’s five-wicket haul helped the hosts bowl India out for 107.

Even Kohli failed to make an impact, scoring just 23 runs. Ajinkya Rahane, who scored a century when India played England at Lord’s last time around, fell for 18 runs.

England have not beaten an Asian team at the home of cricket since 2011, and this could be their best opportunity to break that jinx.

Anderson, who has 544 Test wickets, will have his eyes on equaling Ian Botham’s record of 27 five-wicket hauls in the longest format.

Earlier, India decided to play with two spinners in Ravichandran Ashwin and Kuldeep Yadav, whereas Cheteshwar Pujara had a horrific return to Test cricket.

The live streaming of the match will be available on Sony Liv app.

The live telecast of the match will be available on Sony Six, Sony Ten 3 and Sony Ten 3 HD.