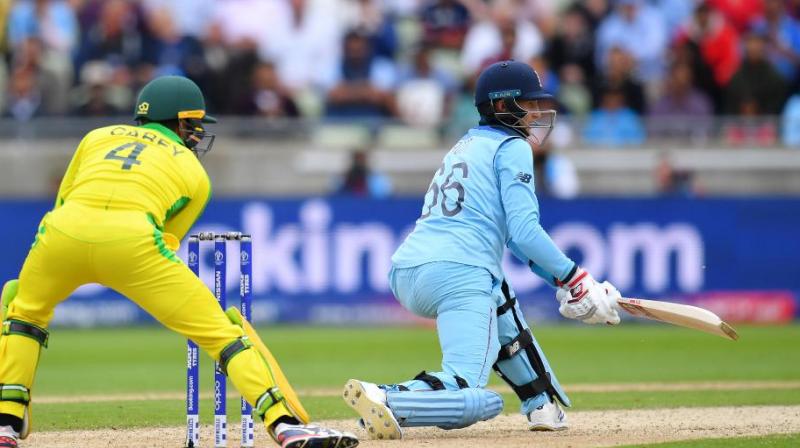 England will head to Lord's bidding to win the 50-over World Cup for the first time, with 2015 runners-up New Zealand. (Photo: Cricket World Cup/Twitter)

Mumbai: England swept into their first World Cup final for 27 years as the hosts crushed Australia by eight wickets on Thursday to book a clash with New Zealand in Sunday's title match.

Eoin Morgan's side ended Australia's bid to retain the World Cup in ruthless fashion at Edgbaston, dismissing their old rivals for 223 and then powering to victory in 32.1 overs thanks to Jason Roy's blistering 85.

England will head to Lord's bidding to win the 50-over World Cup for the first time, with 2015 runners-up New Zealand, who they thrashed by 119 runs in the group stage, standing between Morgan's men and the trophy.

England, who were in the semi-finals for the first time since 1992, have lost all three of their World Cup finals.

32.1: England are into the World Cup 2019 final! England have progressed to a World Cup final after 1992. Jason Roy and Bairstow laid the foundation for England. England will now lock horns with New Zealand on July 14 at Lord's.

England have defeated their old enemy by eight wickets. Chris Woakes is declared the Man of the Match.

28.6: Behrendorff bowls a maiden. However, the victory target is just 27 runs away from England.

26.5: Four! Eoin Morgan in a hurry to finish the game for England.

19.4: Wicket! Pat Cummins dismisses Jason Roy as he is caught by Carey. However, the replay shows that there was no contact between the ball and the bat. Jason Roy is furious as he walks off the field. Eoin Morgan comes on to the crease.

17.2: Wicket! Starc finally provides the breakthrough as he scalps the wicket of Jonny Bairstow. Bairstow departs after scoring 34 off 43 balls. England lose their first wicket on 124 runs.

18.1: The wicket of Bairstow did not affect England's momentum as Roy and Root continue to thrash boundaries.

15.5: Roy hits Steve Smith for three consecutive sixes! England post 116 runs on the board. Roy and Bairstow stitch 100-run opening partnership as England edges closer to the final of the World Cup.

14.5: Fifty for Jason Roy! The injury has not hampered the right-hander's World Cup campaign as he continues to perform on the big stage.

14.1: Four! Bairstow joins the party! Mitchell Starc is back into the attack and Bairstow welcomes him with a four over mid-off.

11.4: Bairstow has done some damage to his ankle. He seems to be in pain and has called the physio. England are 71/0 at this point.

10.6: A big over for England as they gather 13 runs from Nathan Lyon's first over

10.1: Six! Nathan Lyon comes into the attack and Roy welcomes him with a six.

9.5: 50 comes up for England! The opening duo has provided England a good start yet again in the World Cup.

8.1: England off to a stable start as Roy and Bairstow steer England to 40 runs in first eight overs.

6.1: First change in bowling and Cummins comes into the attack.

5.5: Six! Roy superbly times it to clear fine leg. Starc has been hit for two boundaries now in one over.

5.1: Four! Starc bowls it short and Bairstow slashes the ball through point.

3.4: Starc hits the 150 kmph mark! Can he provide the initial breakthrough for Australia?

1.6: Best bowler of the tournament -- Mitchell Starc comes into the attack and concedes only 1 run in his first over.

0.1: England openers Roy and Bairstow walk to the crease. Behrendorff opens the attack for Australia. England need to maintain the required run rate below 5 for winning this match.

48.6: Wicket! Behrendorff has been dismissed for 1. Australia's last wicket is down. England need 224 to win.

47.2: Wicket! Woakes is on a hat-trick. He has dismissed both men who made a 50-run partnership in just two balls. Australia are down to their last wicket with not many deliveries left

47.1: Wicket! Steve Smith has been taken out by none other than Chris Woakes. Superb throw by Jos Buttler all the way to the other end of the pitch

45: Australia have built up a decent total and have 5 crucial overs to go. Mitchell Starc so far has been great help to Smith.

40: Australia are down 7 wickets and Steve Smith has clung on to his wicket. 10 overs to go. How far can Smith take the team?

37.4: Wicket! Pat Cummins departs after his shot lands in Root's hands. Another man down for Australia

34.5: Australia lose another as Jofra Archer takes Maxwell for 22.

30: Steve Smith who just completed his 50 as two batsmen left the pitch in quick succession, is perhaps Australia's last big hope left with the bat.

27.6: Another Wicket! Rashid takes two in an over as Stoinis also departs from the pitch.

27.2: Wicket! Alex Carey dismissed just four runs away from his half-century, England are back at it, as the Aussies lose another man!

25: The partnership continues to work its magic as Australia cross 100 and Smith gets close to his half century. Great composure shown by both batsmen after Australia's horrible start.

24: Australia inch closer to a total of 100 as the Smith-Carey partnership keeps it together.

20: Looks like Australia finally can climb back on to the road and post a decent total for England to chase. Singles and Twos with the occasional boundaries has always worked in high pressure games.

17: Thanks to a couple of boundaries by Steve Smith, the runs seem to be climbing faster for the Kangaroos now as Australia cross 60.

15: Australia are not losing wickets anymore, but this speed might not get them a big total in the end.

10: Australia have somewhat stabilised the boat, but they are still slow on the board. Another wicket might completely turn the tables on the Kangaroos.

8.0: England have maintained some tight pressure on the Aussies here but they are managing to sneak a few runs here and there.

6.1: Wicket! Bowled by Woakes! Another man down for Australia as Handscomb departs on 4. This is starting to look like India's demolition from not so long ago!

2.4: Wicket! Oh No, Australia have lost its second opener as well! David Warner has been sent back!

1.1: Wicket! Finch falls prey to an lbw. Early wicket for England, and Australia have also lost their review.

Also read: AUS vs ENG; Key players to watch out for

Hosts England will face Australia in the second semi-final of World Cup 2019 at Edgbaston, Birmingham on July 11. England openers Jonny Bairstow and Jason Roy have been in sublime form lately, putting on 100-run partnerships against India and New Zealand.

For Australia, David Warner and Aaron Finch have been in stunning form and are among the leading run-scorers of the tournament with 638 runs and 507 runs respectively.

England were successful in gaining momentum ahead of the semi-final. On the other hand, Australia suffered a defeat against South Africa in their last league match of the tournament. Injuries have been a concern for the Australian side as Usman Khawaja and Marcus Stoinis have joined the injury list alongside Shaun Marsh.

The Australian bowling unit will be led by Mitchell Starc, who is the leading wicket taker of the tournament with 26 wickets.

Rain interruptions are expected during the match although there is hope that the match won't be pushed to the reserve day. The pitch at Birmingham has been good for batting in the initial overs, before slowing up later on in the game.

The match is scheduled to start at 3 pm IST on Thursday. (July 11)

The match will take place at the Edgbaston, Birmingham.

Star India has acquired the rights of telecasting the tournament, and the matches will be telecast on various Star Sports Channel. The matches can be viewed live on Hotstar as well.