Pakistan was bowled out for 105 runs by Windies in their opening game at Trent Bridge after being peppered by shorts balls on bouncy track. 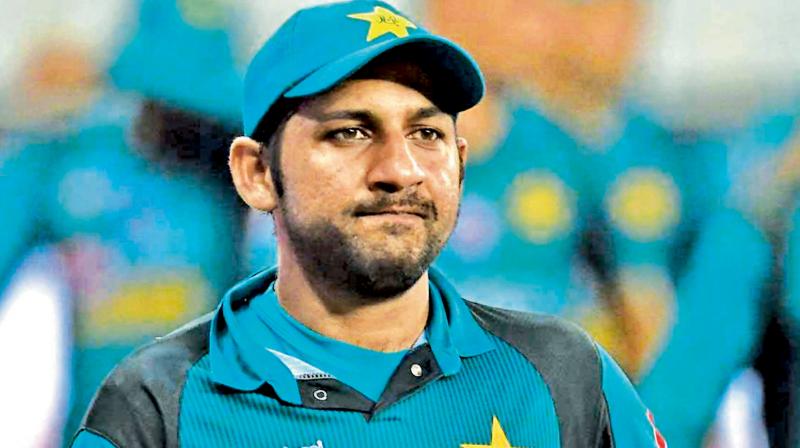 The report quoting Geo News said that Sarfaraz is unhappy that Pakistan generally get pitches in ICC events that didn't favour their game. (Photo: File)

Karachi: Pakistan captain Sarfaraz Ahmed is apparently not happy with the grassy pitch prepared for their World Cup match against defending champions Australia at Taunton on Wednesday.

According to a report in the widely circulated "Jang" newspaper from Taunton, Sarfaraz after inspecting the pitch at the Taunton ground was not happy that Pakistan would have to play on a track that clearly will have bounce, pace and help for the pace bowlers.

Pakistan was bowled out for just 105 runs by West Indies in their opening game at Trent Bridge after being peppered by shorts balls on a bouncy track.

The report quoting Geo News said that Sarfaraz is unhappy that Pakistan generally get pitches in ICC events that didn't favour their game.

According to the report, Sarfaraz has complained that in contrast India always get pitches in ICC events which favour batsmen and spinners and these things are ideally suitable for Asian teams.

Pakistan is playing an ODI for the first time at Taunton and it will also be the first time Sarfaraz will lead the side against the Australians in an ODI.

When the two sides met in a five-match ODI series in March in UAE, the national selectors had rested Sarfaraz and five other key players for the rubber in which the green shirts were whitewashed.

The Pakistan captain was disappointed last week when the match against Sri Lanka was washed out due to bad weather, giving both teams a point each.

Pakistan were bowled out for 105 by West Indies in just 21.4 overs with Oshane Thomas taking four wickets.

Pakistan bowling coach Azhar Mahmood said that the players have learnt from their mistakes and even if the pitch had bounce and movement they would try not to repeat those mistakes again.

Azhar said that the nature of the pitch could be different on the day of the match and normally county pitches favoured the batsmen in one-day cricket.

The former all-rounder said that after the win over England the morale of the Pakistan team was very high and the players were now looking forward to also beating Australia.

Unfortunately, Wednesday's match is also expected to be affected by bad weather.