'I made bad decisions': Tamim Iqbal on his bad form in World Cup 2019

Iqbal has not even touched the 30-mark score in any of his three World Cup matches. 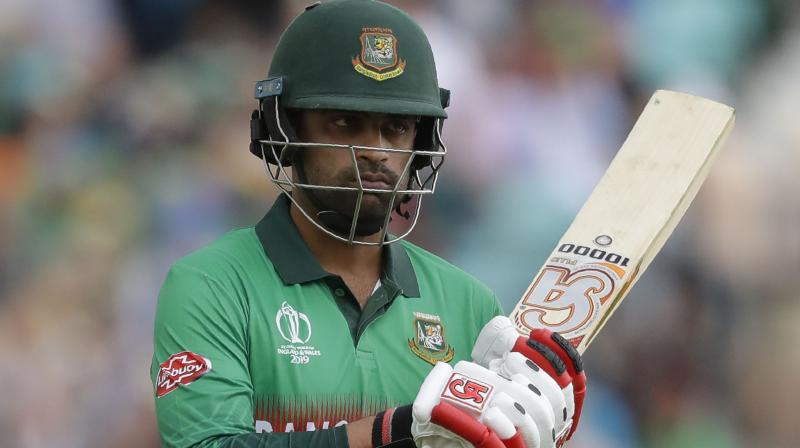 After defeating South Africa by 21 runs, Bangladesh lost both of their next two matches played against New Zealand and England. (Photo: AP)

London: Bangladesh opening batsman Tamim Iqbal admitted he made bad decisions while batting due to which he has not been able to leave a mark on the field till now in the ongoing ICC Men's Cricket World Cup.

Iqbal has not even touched the 30-mark score in any of his three World Cup matches. In Bangladesh's opening match in the premier tournament against Bangladesh, Iqbal scored 16 runs before he was caught behind off Andile Phehlukwayo's delivery.

Whereas, in the next two matches against New Zealand and England, Iqbal scored only 24 and 19 runs respectively.

After defeating South Africa by 21 runs, Bangladesh lost both of their next two matches played against New Zealand and England.

After not being able to perform as per his capabilities, Iqbal expressed confidence saying, "As long as I batted, I did well, and then I make one mistake and got out. This is cricket, and you have to take it. I hope I take it in a positive way. I know the runs are around the corner. I am capable and I have done it before against the best attacks in the world, and I don't see why I can't do it again. And if I can't, that is also life".

However, Iqbal has performed brilliantly between the 2015 and 2019 World Cup as his average 57.06 is second only to India batsman Rohit Sharma among openers. He accumulated 2511 runs in 51 innings during this period which included seven centuries and 18 half-centuries.

"It is my expectations that is creating pressure. Only people close to me will know how I am feeling. I keep on going back to 2015 because I suffered, and so did my wife and family. It was a black chapter in my life. It is very easy to tell me that I have done well in the past. But I am not at all shy to say that I am worried that I don't go back to those days again. The beauty of the game, though, is, people forget everything after one or two good innings," he said.

Iqbal also acknowledged the fact that innings he played in the past do not really matter as it is only the present performances that matter. He further added that he is hoping to turn things around in the next couple of games for his side by scoring runs.

"There's no 'enough' in cricket. I can easily point you towards my record in the last 50 matches. Nobody remembers it. It is always the present. But if I want to grow as a cricketer, I have to remember what I have done. I am trying hard, but I hope I don't try too hard, which probably I am. I hope if I score in one of the next couple of games, I will be up and running," Iqbal said.