It was a safe start by South Africa with both Amla and De Kock not taking any undue risks in the first 10 overs that yielded only 35 runs. 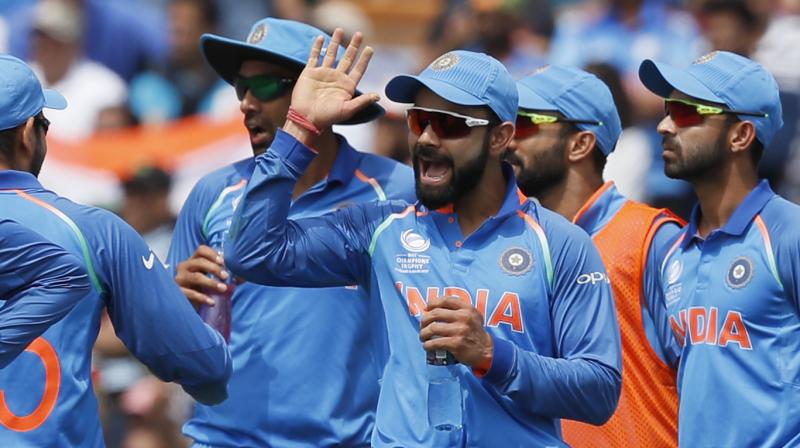 After a poor match against Sri Lanka, Ravindra Jadeja (1/39 in 10 overs) was at his accurate best stifling the runs in those middle overs in tandem with comeback man Ravichandran Ashwin (1/43 in 9 overs).(Photo: AP)

The Proteas lived up to their 'perennial chokers' tag with another embarrassing batting collapse after openers Hashim Amla and Quinton de Kock put on 76 runs.

World's No 1 team lost their last eight wickets for 51 runs after being comfortably placed at 116 for one at one stage to be bundled out in 44.3 overs.

Two run-outs of skipper AB de Villiers (16) and David Miller (1) within a space of six deliveries started the slide from which South Africa could never recover with almost all the Indian bowlers becoming successful in choking up the runs.

India bowled an astounding 141 dot balls which is equivalent to 23.3 maiden overs out of the 44.3 overs that South Africa batted.

India took control of the match in the second Powerplay (between overs 11-40) in which South Africa managed only 143 runs losing six wickets in the process.

After a poor match against Sri Lanka, Ravindra Jadeja (1/39 in 10 overs) was at his accurate best stifling the runs in those middle overs in tandem with comeback man Ravichandran Ashwin (1/43 in 9 overs).

Jasprit Bumrah (2/28 in 8 overs) was on target with his blockhole deliveries and cleverly mixed short balls that did the trick.

Bhuvneshwar Kumar (2/22 in 7.3 overs) was on hat-trick as he polished off the tail but also maintained a brilliant channel outside the off-stump making life difficult for the top-order batsmen.

Even Hardik Pandya (1/52 in 10 overs) gave a much better account of himself bowling as many as 29 dot balls and in process got Faf du Plessis (36), who dragged one back onto his stumps.

Ashwin and Jadeja may not have got too many wickets but removed openers Amla (35) and De Kock (53, 72 balls) after to create inroads.

It was a safe start by South Africa with both Amla and India's nemesis in recent times De Kock not taking any undue risks in the first 10 overs that yielded only 35 runs.

They were restrictive but both Bhuvneshwar and Bumrah couldn't produce too many wicket-taking deliveries during that phase.

The next seven overs saw South Africa score another 36 runs with Amla's return catch being dropped by Pandya, who erred in length. Amla flicked him over square leg boundary for a six.

Finally, it was Ashwin, who got the much-needed breakthrough when Amla tried to cut a delivery which didn't have much width only for Mahendra Singh Dhoni to complete a smart catch behind the stumps.

Du Plessis and De Kock also had a steady partnership of 40 runs for the second wicket before things went all awry.

De Kock tried to sweep a straight ball only to be caught plumb in-front of the wicket by Jadeja.

De Villiers, who has been in horrible form, couldn't make his ground as Dhoni whipped the bails off in a flash.

In-form Miller was involved in a horrible mix-up with Du Plessis to end up at the same end as South Africa slumped to 142 for 4 from 140 for 2 in a space of six deliveries.
India never took their foot off the pedal after that two run-outs.