Gap between ODI teams have narrowed

To predict a Bangladesh win at that stage was to mock cricket logic. 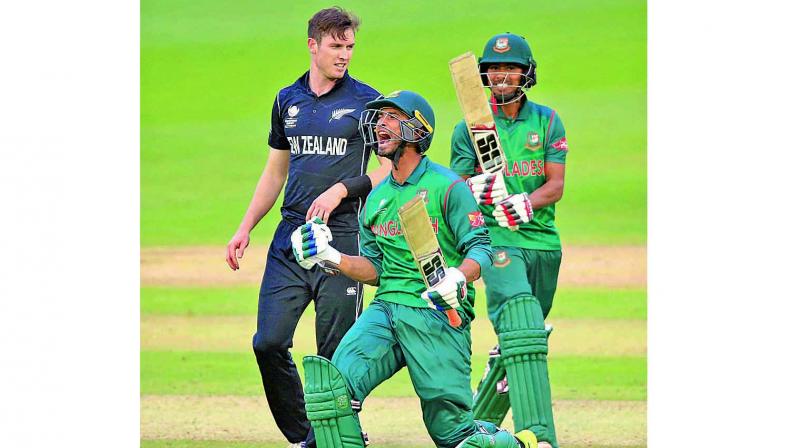 Hand on heart did you think Bangladesh would beat New Zealand after being reduced to 33/4 in the early stages of the run chase? If you say yes, you are under threat of my screaming “Liar, Liar”!

To predict a Bangladesh win at that stage was to mock cricket logic.

True, upsets and turnaround results add to the charm and glory of sport, but even by that yardstick this was among the ‘rarest of rare’.

In some way, the hardship quotient for Bangladesh was not dissimilar to what India faced beating Zimbabwe in the 1983 World Cup, except that they were batting second. In 1983 India, batting first, had recovered from 17/5 to 262, riding on Kapil Dev’s epic 175.

Set to score 266, the top order was lopped off within 12 overs. It appeared then that the match might be well over in 25. Instead it went the distance, resulting in an incredible run chase to bring Bangladesh back from the dead.

In the process, this also produced one of the finest partnerships in the history of ODI cricket. Centurions Shakib-ul-Hasan and Mahmadullah rotated the strike, played the big strokes when needed and handled the pressure brilliantly.

This was astonishing batting leading to an astonishing result in what has developed into an astonishing tournament. Till a few days back, the big talking point was how rain was ruining the Champions Trophy. Now, it’s about exciting cricket and topsy-turvy results.

The last three matches have added unexpected twists and flips to the championship. Pakistan, thrashed by India, beat South Africa albeit in a rain-affected match, and Sri Lanka brought down high-flying India with an immaculate batting performance.

Suddenly, three unfancied teams find themselves just a step away from a place in the semi-finals. Among the fancied sides, New Zealand have been bumped off, Australia are at the mercy of England (as I write this), while India and South Africa have to knock the other out to reach the last four.

Obviously, vagaries of the English weather and some luck have played some part in how this situation has transpired. Australia, for instance, were perfectly placed to beat Bangladesh till the weather turned cruel.

What seems more pertinent to me is that this reflects how the gap between teams has narrowed in limited overs cricket. Unlike in the longest format where the top four sides seem way ahead of the bottom four, this is clearly not the case in ODIs and T20s.

So India can beat Pakistan easily, but lose just as easily to Sri Lanka in the next game. And Pakistan, ranked no..8 by the ICC, can rise swiftly from the debris to topple the no.1 ranked South Africa in their next match.

The most dramatic improvement has been England’s. Humbled by Bangladesh in the 2015 50-over World Cup, the English cricket establishment went in for a revamp — in terms of priority, mindset and players — to pursue excellence in limited overs cricket. In this Champions Trophy, they were the first to reach the semis.

To extend the argument beyond just this tournament, Afghanistan have shown they’ve improved by leaps and bounds. On Friday, they decimated the West Indies in an ODI in the Caribbean, a quite remarkable achievement for an associate member.

True, the West Indies are struggling badly these days. They even failed to qualify for the Champions Trophy, which would have been unthinkable even three years ago. And yet, let’s not forget, they are T20 World Cup champions!

I’ve always maintained that the shorter the game, the more level the playing field and this works to the advantage of the lesser fancied teams. Four and five day matches make a heavier demand on technique and temperament, which exposes players lacking deep experience in the longer format. Two other factors that have made a difference are T20 cricket, which demands intrepidity and innovativeness, and the fact that T20 leagues allow players from ‘lesser’ teams to rub shoulders with the best players.

They learn that much quicker, and this has resulted in the closing of the gap between teams while also making ODI and T20 cricket that much more exciting if unpredictable. This in turn puts greater onus on fancied teams to be at their best. Or suffer.

Think of it, only one from South Africa and India — 1 & 2 in ICC ODI rankings — will make it to the semi-finals after Sunday’s game.