IPL 2019: 'Watson thanked me for scoring quickly at the beginning', says Du Plessis 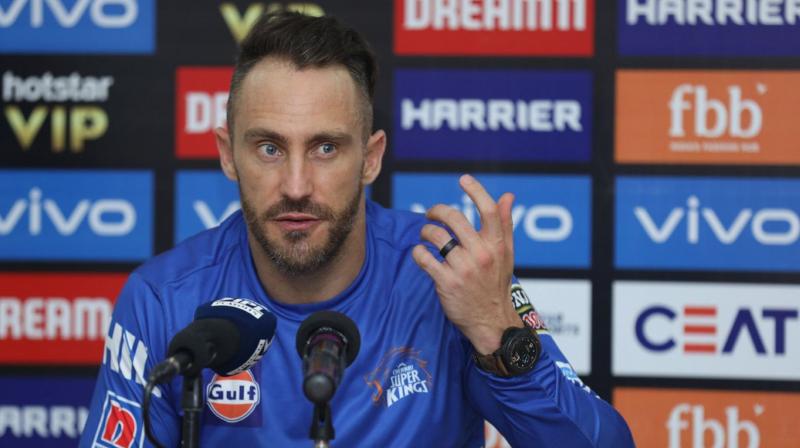 Watson, whose lack of runs was a concern before Qualifier 2, admitted that he was nervous in the beginning. (Photo: BCCI)

Visakhapatnam: Half-centuries from openers helped Chennai Super Kings post a six-wicket win over Delhi Capitals in IPL Qualifier 2 and Shane Watson thanked Faf du Plessis for scoring quickly in the beginning as he got time to get set.

"We spoke about it before the game - didn't have the best run in the last 5-6 games. We have a lot of confidence as a team to win a lot of big games -- so we draw confidence from that," said man-of-the-match Du Plessis.

"We also know the strength of ours is getting those partnerships -- even if we go 3-4 overs without runs, we have a great lower and middle order to bring us back.

"Watto (Watson) thanked me already for scoring quickly at the beginning before he got set. Hopefully, we can both get them off the meat in the final right from the word go," he added.

Watson, whose lack of runs was a concern before Qualifier 2, admitted that he was nervous in the beginning.

"Very grateful for the faith CSK have shown in not just me, but all the players are grateful. Faf batted beautifully. Thanks to Faf for helping me through that stage," said the 37-year-old former Australian captain.

"There are huge positives about age and experience. We have played well from the top with MS (Dhoni) and (coach Stephen) Fleming. When you have experienced players, you have an understanding of what to do. We are making the most of the experience we have had and we are going to make the most out of it on Sunday," he said.

Watson and Du Plessis survived a terrible mix-up early in the innings. After Watson tapped the ball to point, Du Plessis set off before the former started stuttering. Both of them ran together in both directions at one point while the Delhi fielders threw at both the stumps and missed.

In the end, the two of them managed to run a single.

"I reckon we almost ran three there. It was terrible running, and that's not the kind of start you want in a run-chase of a knockout. Thankfully we recovered from that and did pretty well," said Du Plessis.