ICC World Cup 2019: Players to watch out for - Imran Tahir

The 40-year-old became the first South African bowler to take seven wickets in an ODI in 2016. 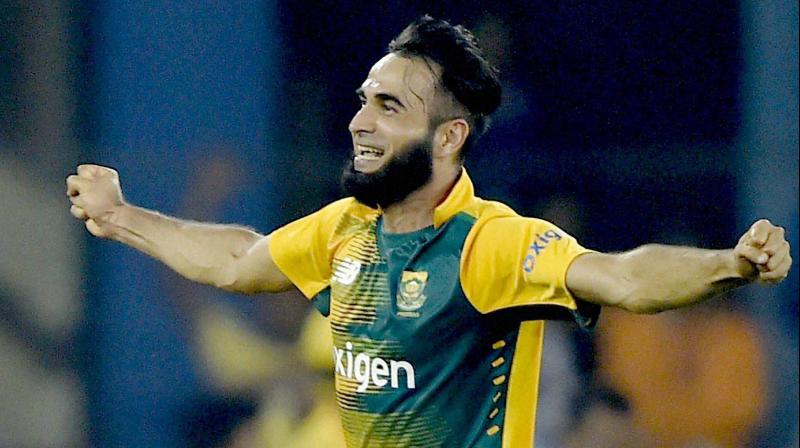 Tahir’s dominance in limited over format was recognized by the Cricket South Africa as they awarded Tahir with South African T20 Player of the Year in 2017. (Photo: PTI)

Mumbai: Playing last World Cup of his career, Imran Tahir will be looking to enthral the audience one last time. The Pakistan-born leg spinner has played a chief role in steering the spin-attack of Chennai Super Kings in IPL 2019. Tahir, along with Harbhajan and Jadeja has dismantled many batting line-ups in the current season. The spin trio has taken 55 wickets this season, playing a major role in narrowing the gap between CSK and the IPL trophy.

Currently, Tahir stands second in the purple cap race, just a wicket behind his fellow countryman Kagiso Rabada.  Tahir has scalped 24 wickets in the tournament and has also taken two 4-wicket hauls. The crowd can’t take its eyes off his trademark celebration after taking a wicket—running down the boundary with more enthusiasm than a five-year-old. His best performance in this year’s IPL was against Kolkata Knight Riders where he dismissed four batsmen while conceding 27 runs in his spell.

CSK's Imran Tahir destroyed the KKR batting lineup as he racked up four scalps in Match 29 of VIVO IPL 2019...

Tahir initiated his career in Pakistan when he got the opportunity to represent the country in its Under-19 team. He has represented Pakistan’s A team and has also played first-class cricket for Punjab in Pakistan. Failing to make it to the national side, Tahir changed his routes and became a resident of South Africa in 2005.

Tahir is married to a South African resident- Sumayya Dildar and he became eligible to play for the country in 2009 after meeting the four-year residency requirement. Tahir had stints with a lot of county teams like Yorkshire, Hampshire, Nottinghamshire, Middlesex and Warwickshire. Representing South Africa in the 2011 World Cup, Tahir emerged as a surprise element and picked up 14 wickets in five matches.

Tahir has been a prominent part of the South African side across all formats since the last five years. He became the number one ODI and T20 bowler in February 2017. But the journey was not serene. Tahir faced criticism when he conceded 260 runs in a test match against Australia in 2012 and was dropped replaced in the subsequent match. Failing to take a single wicket in 37 overs, Tahir recorded the worst bowling figures in Test match history.

Tahir’s career has evolved with his age and his bowling skills have matured like a bottle of wine.  Tahir’s dominance in limited over format was recognized by the Cricket South Africa as they awarded Tahir with South African T20 Player of the Year in 2017. One of his memorable performances was against Rajasthan Royals in 2015 while playing for Delhi Daredevils. Tahir ‘s performance lighted up Feroz Shah Kotla’s crowd as he took four wickets and conceded 27 runs in his spell.

Tahir has declared that he has planned to bid adieu to ODI cricket after the World Cup 2019. South Africa will be relying predominantly on Tahir’s googlies in England to pull off their tag of ‘Chokers’ of the World Cup. Reflecting on his glorious ODI career, Tahir has taken 162 wickets in 98 ODIs at an impressive economy of 4.62. The Yellow Army is expecting Tahir to do wonders in the final to steer Chennai Super Kings to their fourth title.