Sports   Cricket  11 May 2018  Gurbani’s journey should not end with India A: Pandit
Sports, Cricket

Gurbani’s journey should not end with India A: Pandit

A year ago, hardly anyone had heard of vidarbha’s Rajneesh Gurbani. But all it took was two special games to change his fate. 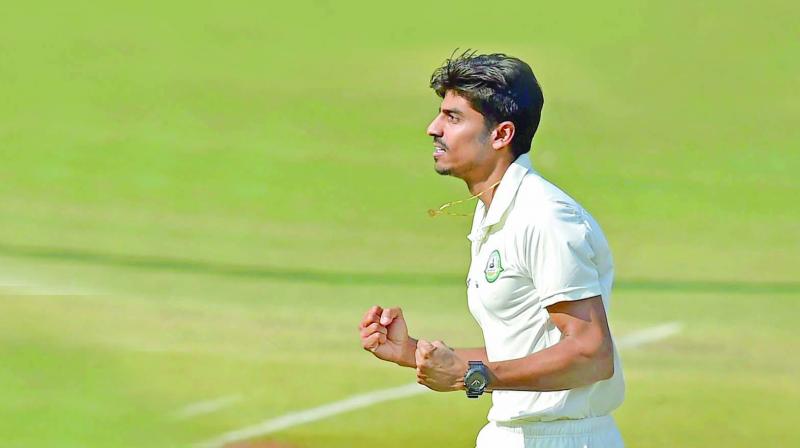 Gurbani made his first class debut three years ago for Vidarbha in 2015.

A year ago, very few people had heard of Rajneesh Gurbani, even in the domestic circuit. His inswingers did not land on the right line nor did he bag wickets consistently. The only recognised bowler from Vidarbha was Umesh Yadav, who has represented India on different occasions. But all it took was two special games and numerous wickets for the fate of this Nagpur-born civil engineer to change as he was selected in the India A squad for four-day matches in England.

Vidarbha coach Chandrakant Pandit feels that it is a great opportunity but the journey should not end here. “I am really happy. Gurbani has the skill but the selectors should not just look at him for India A. They should look at these players as national team prospects,” he says.

Gurbani made his first class debut three years ago for Vidarbha in 2015. He announced himself on the big stage with 39 wickets in the 2017/18 Ranji Trophy season. His laurels include a hat-trick in the final against Delhi. He also tried his hand at Mumbai school cricket while he was studying in the city. But his father’s transfer back to Nagpur ended that stint.

He capitalised on the ball that moves away from the right hander to the maximum damage. Most of the wickets that he bagged were by either trapping the batsmen in front of the stumps or dismantling the wickets.

The Vidarbha team lifted the title for the first time ever with coach Pandit, who was sacked by Mumbai almost a year ago. He discovered the right-arm fast bowler’s mettle and his will to improve. “He is not a bowler who gets easy wickets like catches on mid-on or deep mid-wicket. Gurbani gets caught behinds and leg before’s (lbw),” says Pandit.

Winning the Ranji Trophy was a monumental achievement for the Vidarbha side, one in which Gurbani played a rather important role to get things in the right place. He bowled the best spell of his career against Karnataka in the semi-final with 7 for 68 in a dramatic finish on the final morning as Vidarbha won by five runs.

“When he was not bowling, I saw him working hard at the nets. He was always up for a challenge that arrived for him. These are the signs of an improving bowler. The spells that he bowled were all fantastic if you look at them,” says Pandit. “I’m happy that he didn’t play in the IPL because it was not needed for him right now. A player like him needs confidence and the league could hurt that,” further adds Pandit.