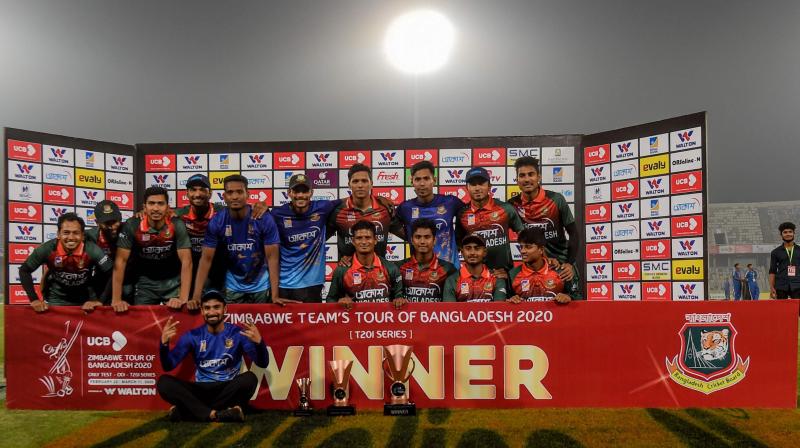 Bangladesh players pose with the trophy after winning the Twenty20 international series against Zimbabwe 2-0 at the Sher-e-Bangla National Cricket Stadium in Dhaka on March Wednesday. AFP Photo

Dhaka: Opener Liton Das maintained his superb form as Bangladesh thrashed Zimbabwe by nine wickets in the second Twenty20 international to clinch the two-match series 2-0 in Dhaka on Wednesday.

Liton hit an unbeaten 60 off 45 balls, his second fifty on the trot, which followed two brilliant centuries in the preceding one-day international series, as Bangladesh reached 120-1 in 15.5 overs after restricting Zimbabwe to 119-7.

Chasing a modest target, Liton struck eight fours as he took the excitement out of the game in a 77-run opening stand.

Naim, who replaced the rested Tamim Iqbal, made 33 runs before he became the only batsman to be dismissed in Bangladesh's innings as Tinashe Kamunhukamwe took the catch off Chris Mpofu at mid-wicket.

Soumya Sarkar remained unbeaten on 20 and finished the game off alongside Liton with a single from Mpofu as Bangladesh reached their target with 25 balls to spare.

Former skipper Brendan Taylor earlier hit an unbeaten 59 off 48 balls with six fours and a six to give Zimbabwe innings some respectability.

Taylor posted 57 runs with Craig Ervine, who made 29, for the second wicket but the Bangladesh bowlers maintained a tight line to put Zimbabwe under pressure.

Al-Amin Hossain and Mustafizur Rahman claimed 2-22 and 2-25 respectively for Bangladesh.

Bangladesh also won the preceding one-day international series 3-0 and one-off Test by an innings and 106 runs.