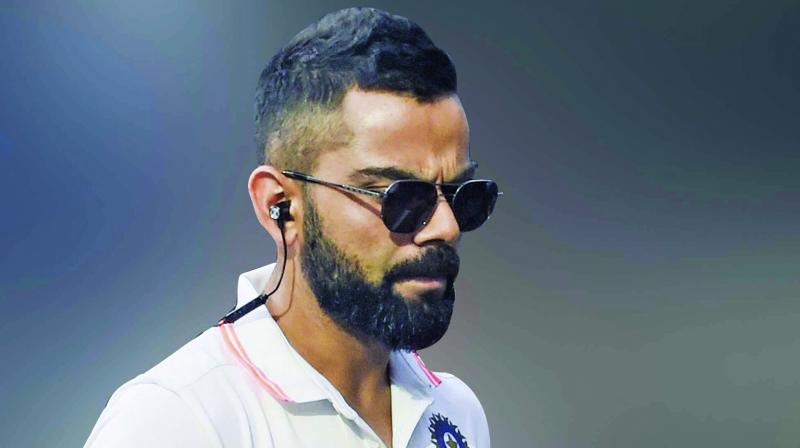 India resisted using the technology for years but finally adopted it in 2016, becoming the last Test nation to do so. (Photo: File)

New Delhi: Skipper Virat Kohli has slammed the decision review system (DRS) as "not consistent" after India had a referral turned down by the TV umpire and went on to lose the fourth one-day international to a record Australia chase in Mohali.

Ashton Turner hit an unbeaten 43-ball 84 to lead Australia's 359-run chase on Sunday -- their highest ever in ODI cricket -- to level the five-match series at 2-2 on Sunday. The final match is in Delhi on Wednesday. Turner, on 41, was on the receiving end of a caught behind appeal off Yuzvendra Chahal in the 44th over that was turned down by the on-field umpire but reviewed by the home team.

Although replays suggested a gap between the ball and the bottom edge of the bat, the "snickometer" showed a spike at the moment the ball passed the bat but the third umpire chose not to overturn the onfield call.

Kohli was not pleased with the decision but accepted his team's inadequacies against a superior Australia in the post-match presentation. "We were sloppy in the field and should've grabbed our chances," Kohli said of his team's fielding lapses.

"But the DRS call was a bit of surprise for all of us and it's becoming a more of a talking point every game. It's just not consistent at all. That was a game-changing moment," said Kohli. It was the second straight time in the series that DRS had been questioned after a review by Australia skipper Aaron Finch in the third ODI in Ranchi could have had an outcome on the game that the tourists finally won.

Finch was trapped leg before on 93 by India's left-arm wrist-spinner Kuldeep Yadav and the umpire raised his finger. The opener called for a review which showed Yadav's delivery pitching on middle stump but ball-tracking technology then showed the ball pitching on the line of leg stump and hitting leg stump. The on-field call was upheld and Australia lost Finch and their sole review. However Finch said overall that DRS was a "pretty good system".

DRS is used by match officials to check umpires' decisions, using slow-motion replays, microphones and thermal imaging. India resisted using the technology for years but finally adopted it in 2016, becoming the last Test nation to do so.