Sri Lanka will look to salvage some pride by displaying good show in the final two ODI's. 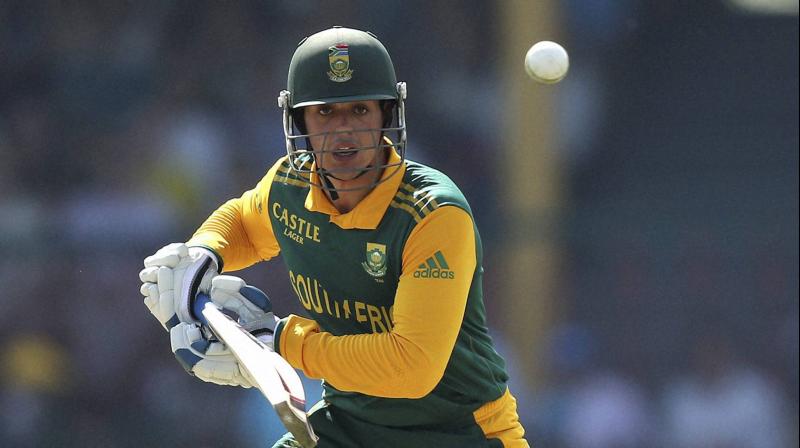 Along with skipper Faf du Plessis, de Kock piled misery on the Sri Lankans hitting them for regular boundaries and dispatching their loose balls. (Photo: AP)

Along with skipper Faf du Plessis, de Kock piled misery on the Sri Lankans hitting them for regular boundaries and dispatching their loose balls.

They both shared a 97-run stand to provide a solid foundation to South Africa. Faf was dismissed for a brisk 36, but de Kock went on to score 121 runs before being dismissed by Kasun Rajitha.

Late power hitting in the death overs by Andile Phehlukwayo and David Miller enabled South Africa to post 331 runs on the board.

Chasing a target of 332, Sri Lanka got off to the worst start possible, as they lost their opener Niroshan Dickwella early.

Lungi Ngidi dismissed Vishka Fernando reducing Sri Lanka to 75 for two at the end of 18 overs.

Rain played a spoilsport in the match and after Duckworth Lewis permutations, Sri Lanka had to chase down 118 more runs off the last eight overs.

The task proved too much for the Islanders, eventually losing the match by 71 runs.

With this win, South Africa has taken an unassailable lead in the five-match ODI series.

Sri Lanka will look to salvage some pride by displaying good show in the final two ODI's.

Sri Lanka takes on South Africa in the fourth ODI at Port Elizabeth on Wednesday, March 13.