To test bench strength or not? India face selection dilemma ahead of 3rd T20

An inexperienced Sri Lanka was no match for India and considering that, a case could be made for the inclusion of Pandey and Samson. 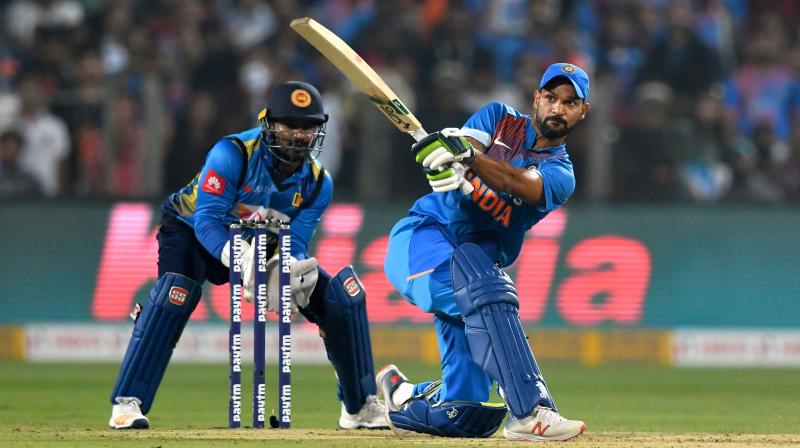 To go with a winning combination or give much needed game time to Sanju Samson and Manish Pandey? That is the dilemma India are facing ahead of the third and final T20 against Sri Lanka here on Friday. (Photo:AFP)

Pune: To go with a winning combination or give much needed game time to Sanju Samson and Manish Pandey? That is the dilemma India are facing ahead of the third and final T20 against Sri Lanka here on Friday.

An inexperienced Sri Lanka was no match for India in Indore and considering that, a case could be made for the inclusion of Pandey and Samson.

Pandey has played just one in the last three series, including the current one, while Samson is yet to get a game since he made a comeback with the Bangladesh series in November.

India have been experimenting ahead of the T20 World Cup in October-November but these two players are yet to be tested.

On the other hand, the absence of senior pacers has opened the doors for Shardul Thakur and Navdeep Saini to make an impression, which they did in the previous game by sharing five wickets among themselves.

Washington Sundar and Shivam Dube, who took the injured Hardik Pandya's place, have got significant opportunities to show what they are capable of.

After the win in Indore, skipper Virat Kohli spoke on how his team is getting better with each passing game.

Most of the players select themselves while he hinted that someone like a Prasidh Krishna could be the surprise package he is looking for the mega event in Australia.

Samson and Pandey must be a tad frustrated to sit out game after game but Friday could be their day. However, what can also not be discounted is the fact that the team management will pick the eleven with the sole aim of winning the series.

Focus will also be on Shikhar Dhawan, who is competing for the second opener's slot alongside K L Rahul. At the moment, Rahul seems ahead in the race to partner Rohit Sharma in Australia.

Jasprit Bumrah did not have the best of outings in his comeback game on Tuesday and he will be raring to go full tilt in the final game.

If he gets to bat, Dube will have do something spectacular to retain his place in side after Pandya returns to action.

Thakur and Saini were impressive in Indore. Thakur was brilliant in the death overs while Saini rattled the batsmen with pace and bounce.

With Sri Lanka having several left-handers, spinners Kuldeep Yadav (2-38) and Washington Sundar (1-29) are likely well retain their place, which effectively means that Ravindra Jadeja and Yuzvendra Chahal will have to sit out.

Sri Lanka, on the other hand, have a lot to work on if they are to trouble the home team. The batsmen will have to make it count after getting starts, which they were not able to do in the second T20.

All-rounder Isuru Udana being ruled out of the game is also a setback. Their main bowler, as put by skipper Lasith Malinga, did not bowl in Indore after injuring himself during warm-up.

The Sri Lankans can definitely do with some experience in the batting department.

Angelo Matthews, who has made a T20 comeback after 16 months, was not picked for the second game in a row. But he could be in the eleven on Friday.

"After that batting performance, everybody has a chance of playing," said coach Mickey Arthur following the seven wicket loss.