Fitness gone, not the humour

The former Indian stumper Farokh Engineer who also played for CCI charms audience with his flamboyance. 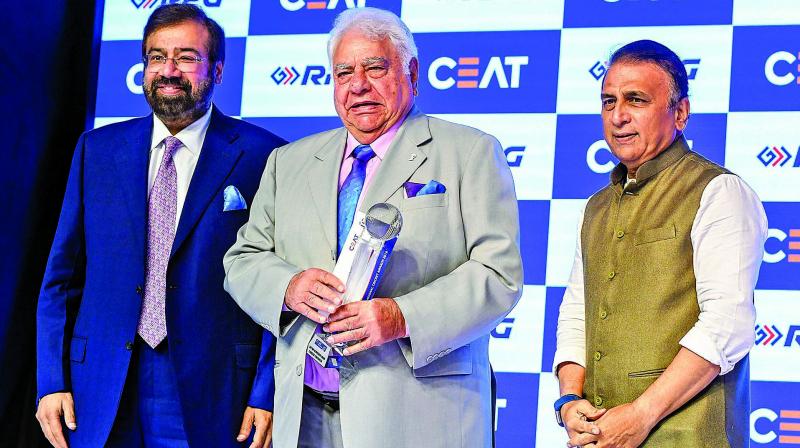 At 80, Farokh Engineer may have lost his fitness but not his sense of homour. The former India stumper known for constantantly chit-chating behind the stumps in his times was at his chirpy best at Cricket Club of India on Wednesday night. The occasion was to celebrate Kapil Dev’s birthday by the Legends Club at C.K. Nayudu Hall.

The former Indian all rounder and 1983 World Cup winning captain, Kapil, had turned sixty on January 6. “Kapil won the World Cup on his own. Had he not scored 175 against Zimbabwe, India wouldn’t have played the final. They eventually won defending a low score against West Indies and I was commentating on the match,” Engineer said.

The former Indian opener who won the Ceat Lifetime Achievement Award of the Year 2018 award in summer, charmed the audience with his wit despite a sore throat. Engineer, who has now settled in England where he played for counties like Lancashire in his prime, recalled his Mumbai days.

“It was an honour to play for CCI and Mumbai. This stadium is one of the best in the world. Those days it was more difficult to play for Mumbai than playing for India, such was the competition,” he said.

The flamboyant batsman was the first-choice keeper for the Rest of the World XI series in England and Australia in the early 1970s. “I used to chat with the skipper or players regarding the situation of the match and bowling changes. We didn’t sledge batsmen. I kind of added a new dimension to wicket keeping by going for catches in the slips as it could have fallen short and the keeper with gloves has the best chance to catch it,” he said.

Engineer recalled his innings at Chepauk against the mighty West Indies where he scored 94 in one session before lunch. “I was on 92 with two overs to go. I got two balls across two overs which could have been boundaries but were fielded well. We could have taken a couple both times but my partner Dilip Sardesai was cautious. It was okay as we didn’t play for records. Eventually, I completed ahundred post lunch and felt great,” he recalled.

The outspoken cricketer was quick to point out flaws in the new Indian sensation Rishabh Pant’s wicket-keeping.

“His approach is same as MS Dhoni’s. But don’t praise him too much at the moment. Encourage him. (But) He’s technically so incorrect. He’s young he will learn from mistakes. Wicket-keeping is not taught, it’s a natural thing. A good wicket-keeper moves his feet, goes to the ball and does not dive all the time; uses his feet all the time. He will improve. I wish I could have a couple of times with him to make him a good wicket-keeper,” he said.

“Dhoni was the same, was dropping straight forward balls. Sachin (Tendulkar) brought him over to me in England when I was commentating for ESPN. I said what do you do and he said – I see the ball, take my eyes off it anticipating it to come into the gloves and I said ‘you should watch the ball right till it comes into the glove,’” he added.

Engineer said currently there were hardly any stumpers who make the teams on the strength of their wicket-keeping abilities but rather as batsmen who can keep wickets. “There are no wicket-keeper batsmen; all are batsmen wicket-keepers who can score runs and also keep wickets. In Test cricket you can’t afford to drop a catch. It does not come often,” he said.

He also praised the Indian team for creating history by becoming the first from the subcontinent to claim a Test series win (2-1) on Australian soil. “I had a lovely text message from (Chief Coach of the team) Ravi Shastri when I sent a congratulatory message. He has done a terrific job. He, Virat Kohli, our pace bowlers and how can I forget (Cheteshwar) Pujara? He’s a stone-waller and tired out all the bowlers. People like Pant and Virat capitalised on the tired bowlers. Australia had the weakest side in absence of Steve Smith and David Warner,” he said.

He also was critical of former off-spinner Harbhajan Singh for his critical comments on R Ashwin, who didn’t feature in the three Tests in Australia due to injury.