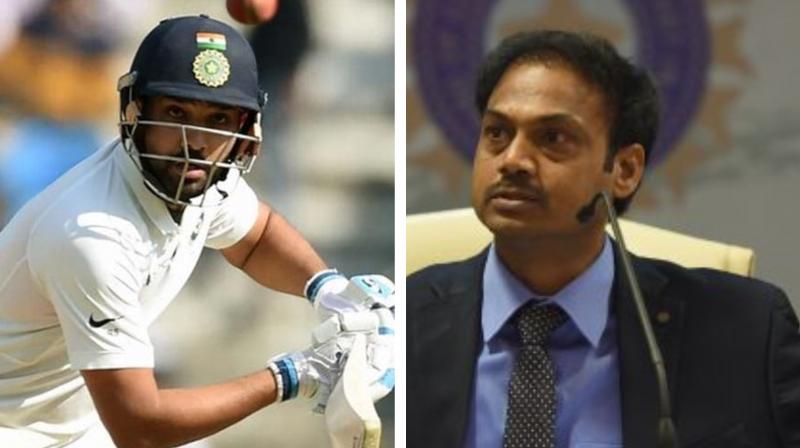 With the fans demanding that Rohit Sharma should open the innings, chief selector MSK Prasad has recently stated that he is thinking to make the hitman open the innings in the longest format of the game. (Photo:AFP)

Mumbai: KL Rahul seems to be going out of favour after witnessing another dismal performance in the recently concluded West Indies Test series. Selectors have now started to search for his suitable replacement.

KL Rahul’s form in the longer format is in the spotlight since 2018. The selectors have shown a lot of faith in the KXIP opener by providing him many chances, but he couldn’t repay the selectors.

With the fans demanding that Rohit Sharma should open the innings, chief selector MSK Prasad has recently stated that he is thinking to make the hitman open the innings in the longest format of the game.

However, KL did manage to score a ton against England during India’s away tour of England in 2018. Apart from that knock, the opener hasn’t scored any notable innings till now.

Rahul witnessed another embarrassing series against West Indies as he failed to score in both the matches. Moreover, as time went by, his form deteriorated. However, during the first Test match, KL managed to score 44 and 38, but in the second Test game, KL scores read 13 and 6.

Follwing KL Rahul’s worrisome form, the fans are wondering how the 27-year-old is still getting a place in the playing XI despite performing so bad in the Test series.

MSK Prasad opens up on making Rohit open the innings

After the tour of West Indies ended, prime selector MSK Prasad revealed that the selectors didn’t meet after West Indies tour had ended. However, he also stated that they will definitely think about making Rohit Sharma open in the longer format and confirmed that they’ll discuss about the same.

In an interview with the India Today, MSK Prasad stated, “As selection committee, we haven’t met after the conclusion of the West Indies tour. We will definitely take this (Rohit as an opener) point into consideration when we all meet and discuss about it.”

MSK Prasad also called KL Rahul as a great talent. However, he knows that he is going through a rough patch in the longest format. The former Indian cricketer stated that they were worried about his form and said that KL needs to spend more time on the ground to discover his form.

“KL (Rahul) is definitely a great talent. Of course, he is going through a bit tough time in Test cricket. We are definitely concerned about his form. He needs to spend more time on the wicket and regain his touch and form,” Prasad added.