Langer's side clinched a dramatic fourth Test win over England in the last hour of Sunday's final session at Old Trafford. 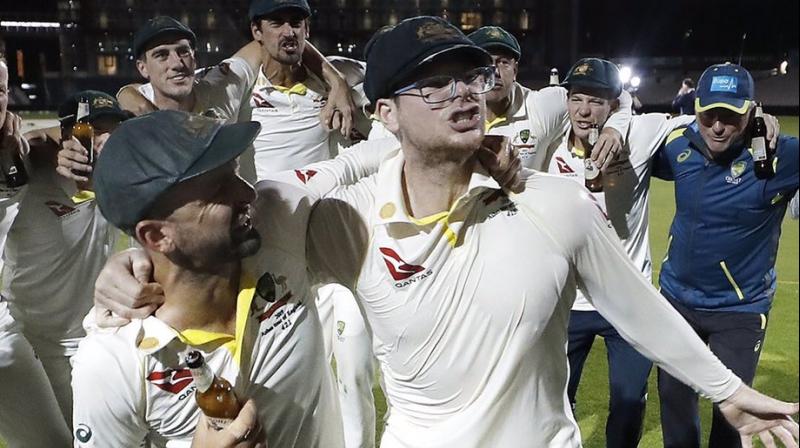 Some fans and pundits came to the conclusion that Smith was unkindly parodying the glasses-wearing Leach. (Photo: Twitter)

Langer's side clinched a dramatic fourth Test win over England in the last hour of Sunday's final session at Old Trafford.

The victory gave Australia a 2-1 lead with just one match to play and they marked the occasion with a raucous on-field party.

At one stage, Australia's star batsman Steve Smith was seen wearing and rubbing a pair of glasses before shadow batting left-handed in the middle of a team huddle.

Some fans and pundits came to the conclusion that Smith was unkindly parodying the glasses-wearing Leach.

Leach had helped England teammate Ben Stokes snatch a remarkable win in the third Test with a 76-run unbroken partnership, during which the spinner scored just one run.

But Langer is adamant Smith was mimicking Chris Rogers, who last played for Australia in 2015 and, like Leach, wears glasses when he bats.

"Experience tells me that when you're doing well, people will try and pick holes in you," Langer told reporters on Tuesday.

"I know the truth. Chris Rogers is a great mate of the squad, that's all it's about. People can make up what they like about it, but that's the truth."

"No one has mentioned it or spoken about it. It's all talk from you guys (the media)."

Australia can clinch their first Test series win in England since 2001 if they avoid defeat in the last match, which starts at the Oval on Thursday.