Virat Kohli made just one change from the last match as he brought in Chahal for Kuldeep Yadav. 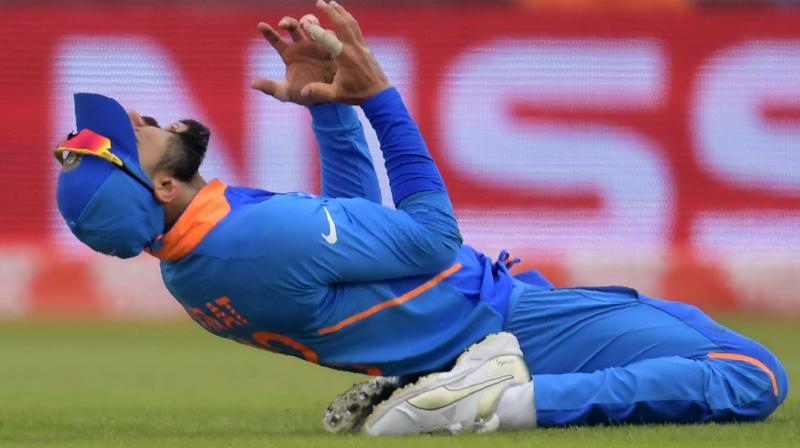 Indian captain Virat Kohli reacts in the field during the semifinal against New Zealand at Old Trafford in Manchester on Tuesday. (Photo: AFP)

Manchester: The semifinal clash between India and New Zealand has spilled into the reserve day after a heavy spell of rain stopped the contest towards the end of the first innings here at the Old Trafford ground.  As the local Met office had predicted early, rain interrupted exactly at 2 pm (local time) and forced the players off the field with New Zealand needing only 23 balls to complete their first innings. The Kiwis were 211 for 5.

After almost three hours, the rain stopped for a brief time to raise hopes of the spectators. But the officials announced that the match would resume on Wednesday (10.30 am local time, 3 pm IST) from the point at which it was halted after an inspection at 6.10 pm (local time). If no play on the reserve day, India would go through to the final for having finished on top of the league standings. 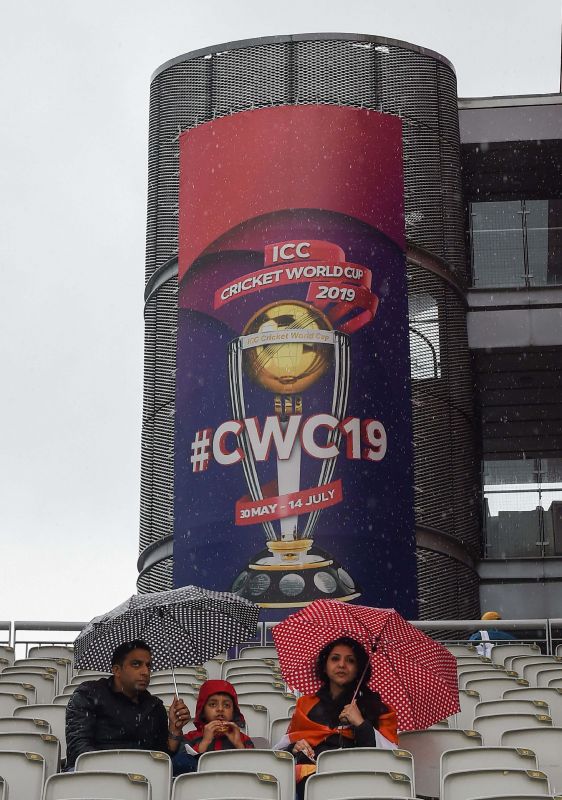 Spectators shelter under umbrellas as rain falls during the semifinal between India and New Zealand at Old Trafford in Manchester on Tuesday. (Photo: AFP)

After electing to bat under overcast conditions, New Zealand had a shaky start as they lost opener Martin Guptill for 1. After a dramatic opening delivery that saw Virat Kohli & Co. losing their precious DRS following an unsuccessful LBW referral, Indian pacers fired in back-to-back maidens. New Zealand could open their account only on the 17th ball of the innings. With pressure mounting on the openers, Bumrah removed Guptill with a peach of a delivery that jagged in. The extra bounce induced an outside edge and Kohli snared a brilliant catch at second slip as Guptill’s nightmarish run in the World Cup continued.

Coming in at 1/1, skipper Kane Williamson (67 off 95 balls) oozed confidence. The skipper, along with Henry Nichols, played out the early threat of Bumrah as the Kiwis crawled to 27 for 1 in 10 overs, the lowest powerplay score of the tournament. Bumrah spit venom in his first spell — 4-1-10-1. 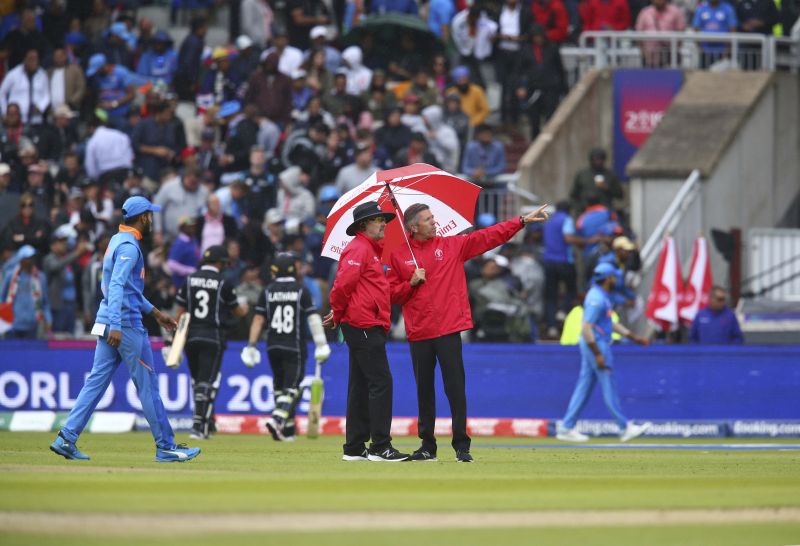 Umpires stand on the ground with an umbrella as players leave the field while it rains during the semifinal between India and New Zealand at Old Trafford in Manchester on Tuesday. (Photo: AP)

Boundaries were hard to come by for New Zealand. Williamson scored their first boundary in 13.3 overs with a slog-sweep off Chahal in the 28th over. After the 68-run stand with Nichols, who was bowled through the gate by Ravindra Jadeja, Williamson joined hands with seasoned Ross Taylor for yet another half-century stand (65 runs). Williamson made his way back to the pavilion after being lured by Yuzvendra Chahal for an expansive slash. He ended up giving a simple catch to Jadeja.

Hardik Pandya, who gave a scare to the team management by limping off the field and holding his groin, returned after two overs with obvious discomfort. He, however, completed his quota of 10 overs for 1/55. Ross Taylor (67 no off 85 balls) and Tom Latham (3) were unbeaten when the covers came on.

Kohli made just one change from the last match as he brought in Chahal for Kuldeep Yadav. The non-inclusion of Mohammed Shami raised a few eyebrows as he has taken 14 wickets in four innings.