India lost the World Cup in the first 20 minutes

In a twisted tale of fate, India’s much-criticised middle order performed well in the match where openers had failed. 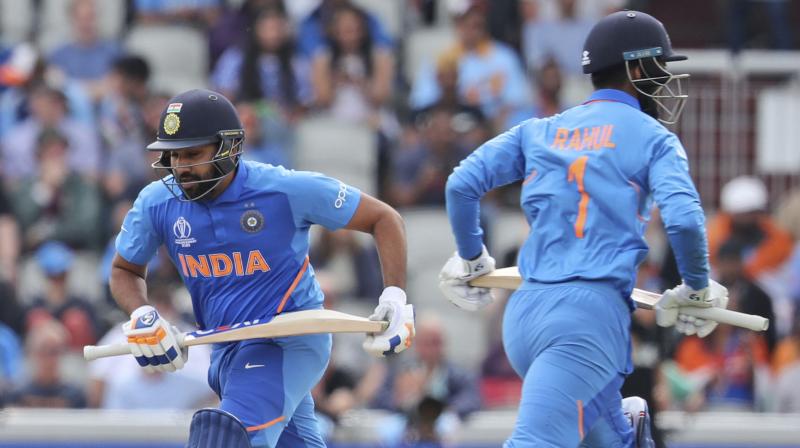 Losing India’s top three batsmen was such a big hit to the team that even the brilliant performances that would come later from all-rounder Ravindra Jadeja and Mahendra Singh Dhoni wouldn't be enough to hit the required target. (Photo: AP)

Mumbai: The first semi-final of the 2019 ICC Cricket World Cup featured two teams which were both unbeaten for a majority of the tournament’s run. After restricting the Kiwis to a not-very-high score of 239, the Indian players and fans both thought the match was well within a winning grasp.

Indian opener Rohit Sharma had scored five centuries in India’s league clashes. While it would be unfair to expect the same of the opener against a team that has also played exceptionally well and made it to the semi-finals, nobody expected the batsman to falter within the first few overs.

Sharma was sent back to the pavilion after scoring just a single run after he allowed a delivery by Mark Henry to carelessly nick his bat and make its way to Tom Latham’s gloves.

Indian skipper Virat Kohli replaced Sharma on the field. Kohli, who is the top-ranking ODI batsman in ICC rankings, also failed to defend himself from an lbw after scoring a single run. When the ball hit Kohli’s shin-pads, India lost not only another capable batsman but also their only review.

Perhaps the most disappointing wicket was that of Lokesh Rahul. The batsman got caught by the keeper in an act, that was almost similar to what had gotten fellow opener Rohit Sharma dismissed not many deliveries ago. It was a risky shot to play, delivered by Mark Henry, and Rahul had no reason to play the shot after Sharma and Kohli had already been sent back to the pavilion.

Losing India’s top three batsmen was such a big hit to the team that even the brilliant performances that would come later from all-rounder Ravindra Jadeja and Mahendra Singh Dhoni wouldn't be enough to hit the required target. Dhoni managed to score a half-century and was hungry for more as he was dismissed by Guptill in a brilliant throw.

Ravindra Jadeja silenced all his critics throughout the match. After sublime fielding and bowling in the first innings, Jadeja went on to display his batting skills and went on to score a knock of 77 in 59 balls.

As the player had Indian fans screaming with every boundary he hit, the crowd was silenced when what looked like another six ended up in the hands of Kane Williamson just before the boundary line.

Also read: Jadeja silences Manjrekar in the commentary box after his fifty

In a twisted tale of fate, India’s much-criticised middle order performed well in the match where openers had failed. India end their brilliant World Cup 2019 run with all kinds of respect as the match was a 50-50 right until the last over.