ICC CWC'19: 'We had a point to prove after losing ODI series vs Aus at home': Kohli

The legend of Dhawan in ICC tournaments continued to grow as his stylish 117 powered India to 352 for five. 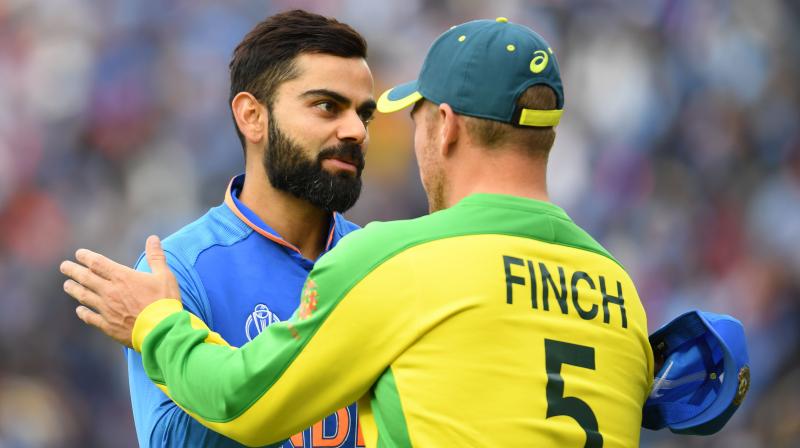 Australian captain Aaron Finch admitted that his bowlers conceded too many runs in the last 10 overs. (Photo:AFP)

London: Captain Virat Kohli said India "had a point to prove" after his team beat Australia by 36 runs in the World Cup here Sunday, avenging their bitter ODI series loss at home earlier this year.

The legend of Dhawan in ICC tournaments continued to grow as his stylish 117 formed the cornerstone of a fantastic batting display that powered India to 352 for five.

In reply, Australia were bowled out for 316 at the Oval.

"Top win for us after losing that series in India. We had a point to prove. We just came with intent," Koli said at the post-match presentation ceremony.

"The opening stand was outstanding. Hardik, me, MS, it was a flat wicket, but we were very professional that's always pleasing as a captain. You can't take things for granted just because you have 350 on the board."

After a professional run-chase against South Africa in the opener, the second match saw the 'Men In Blue' burying the five-time world champions under a deluge of runs. Shikhar Dhawan made 117, Kohli struck 82 while Rohit Sharma contributed 57. Hardik Pandya and Mahendra Singh Dhoni then scored briskly to set Australia an imposing target.

"I held one up and Hardik could go from ball one."

Asked about the possibility of playing Mohammed Shami in the coming matches, Kohli said, "If Shami plays, it has to be proper overcast and bowling conditions. Bhuvneshwar the new ball, old ball - the wickets of Smith and Stoinis. These guys are very experienced, you hardly need to say anything to them."

Australian captain Aaron Finch admitted that his bowlers conceded too many runs in the last 10 overs.

"They got 120 off the last 10 overs and that's a lot. There wasn't huge amount on offer. We could have dried up more. They bat very deep, you want to go for wickets," Finch said, adding they were "outplayed".

Man of the Match Dhawan called the victory a "great sign" for one of the prime title contenders.

"It's a great sign for our team and I'm happy with this man of the match award. Very happy with the performance overall. We are a great fielding side, we took great catches. We have a good bowling side, great spinners as well.

"We work really hard in the nets, our process is very strong that's why the results are going our way. We ticked all the boxes today. We knew they are a great side and the match will go down to the wire. We need to continue ticking the boxes in upcoming matches," Dhawan said.