The legend of Dhawan in ICC tournaments continued to grow as his stylish propelled India to a commanding 352 for five. 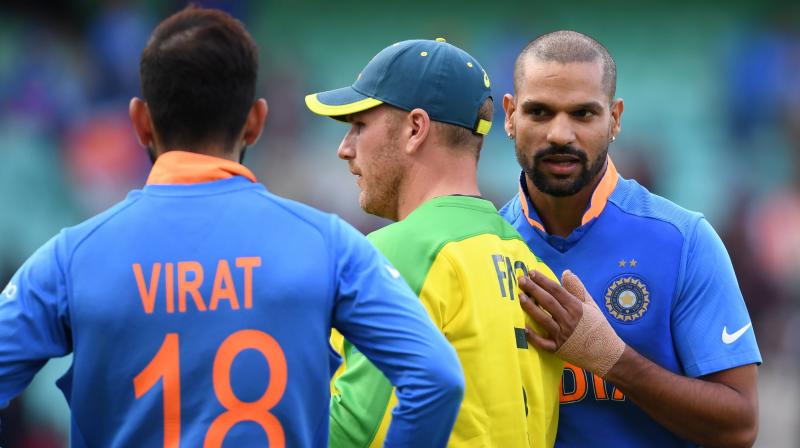 In reply, Australia never looked like getting there as they managed only 316 in 50 overs with Steve Smith (69 off 70 balls) and David Warner's (56 off 84 balls) half-centuries being of little consequence. (Photo: AFP)

London: Shikhar Dhawan's classy hundred and a quality bowling effort powered India to a 36-run victory over Australia, denying two fallen heroes a fairytale script while sounding a warning bell for their opponents in the World Cup here on Sunday.

The legend of Dhawan in ICC tournaments continued to grow as his stylish 117 formed the cornerstone of a fantastic batting display that propelled India to a commanding 352 for five.

In reply, Australia never looked like getting there as they managed only 316 in 50 overs with Steve Smith (69 off 70 balls) and David Warner's (56 off 84 balls) half-centuries being of little consequence.

After a professional run-chase against South Africa in the opener, the second match saw the 'Men In Blue' burying the five-time world champions under a deluge of runs. An astounding 131 dot balls (21.5 overs) were bowled by Indian bowlers which ultimately made the difference.

Warner's innings was an antithesis to his style of play and pegged Australia back before he was sent back by Yuzvendra Chahal (2/62 in 10 overs). Still Australia was in with a slim chance till Usman Khawaja (42) and Smith were at the crease.

Khawaja shuffled way too much trying to play a scoop behind square and was bowled by Jasprit Bumrah (3/61 in 10 overs), and Australia lost whatever momentum they had gained.

Smith, who played his usual shuffling across the off-stump game, looked threatening but an asking rate of 10 put immense pressure, and Bhuvneshwar Kumar got him with one that angled in to catch him in-front of stumps. It was a nice comeback for Bhuvneshwar (3/50 in 10 overs), who was hit for three boundaries by Glenn Maxwell.

Once Smith was gone, the game was as good as over for Australia even though Alex Carey helped himself to a half-century (55 no off 35 balls). Having beaten South Africa and Australia in the first two games, India will now be considered as the team to beat in this tournament.

Earlier, Dhawan, during his 17th ODI hundred found perfect support from fellow opener Rohit Sharma (57 off 70 balls) in a stand of 127. He then joined forces with Virat Kohli, consolidating the innings with a 93-run stand for the second wicket.

The skipper played a very effective knock with his two maximums off Mitchell Starc (1/74 off 10 overs) -- over long-on and extra cover -- being the stand-out shots of the game.

The last 10 overs yielded 116 runs, primarily due to generous contributions from the middle-order players Hardik Pandya and Mahendra Singh Dhoni along with their skipper.

The team's permanent floater, Pandya (48 off 27 balls) played in a manner only he can, and was the perfect icing on the cake on a flat Oval deck. Dhoni (27 off 14 balls) did his bit in putting the finishing touches, which included a six over square leg off Starc.

After skipper Kohli made the right call, the Indian openers played out a good spell from Starc and Pat Cummins (1/55 in 10 overs), with the latter pitching it up and repeatedly beating the bat.

What worked brilliantly for the Indian batsmen was the manner in which they planned which bowlers they wanted to go after.

Rohit was dropped on 2 by Nathan Coulter-Nile at square leg off Starc and from then, the Indian openers became more cautious.

Dhawan, who has a stupendous record at the Oval ground, where he averages over 120, waited for Coulter-Nile, and three boundaries in the eighth over eased the pressure.

The hero of Australia's match against West Indies, didn't have the pace to trouble the Indians and he bowled short enough to be cut and pulled by both the players. Rohit, for good measure, hooked him for a six while Dhawan played some fabulous cut shots.

Leg spinner Zampa (0/50 in 6 overs), who was impressive against India in the last series, was targeted at the onset as both the openers used their feet to perfection. Once they started using their feet, the leg-spinner started dropping it short and Dhawan would rock onto the backfoot to punish him.

There's a saying in Indian cricket that if Dhawan gets his cover drive going, he is unstoppable and that's what happened on the day. Rohit was more subdued but it didn't matter as the Delhi southpaw's 16 hits to the fence set the tone.