Finch said a poor start to Zampa’s spell gave the Indian batsmen an opportunity to get on top of him. 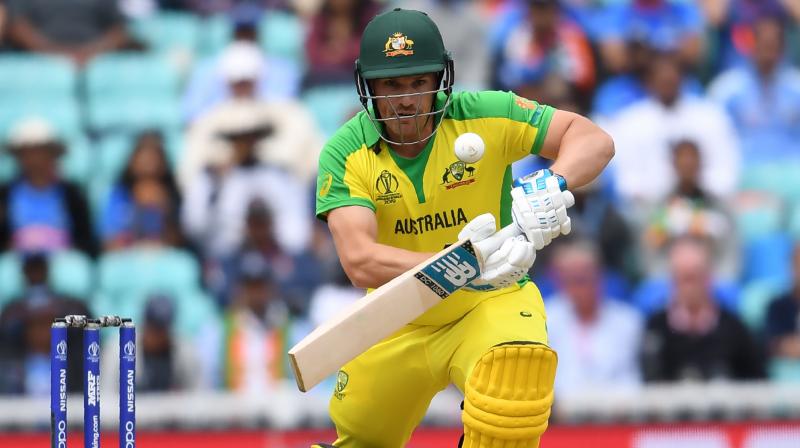 India made a cautious but solid start with centurion Shikhar Dhawan forging two significant partnerships at the top of the order with Rohit Sharma and skipper Virat Kohli. (Photo:AFP)

London: Australia’s failure to take early wickets against India and the loss of batsmen at crucial times cost them victory against the twice champions in their World Cup clash at the Oval on Sunday, said captain Aaron Finch.

India made a cautious but solid start with centurion Shikhar Dhawan forging two significant partnerships at the top of the order with Rohit Sharma and skipper Virat Kohli.

“I think they took their time, obviously, and they assessed the conditions really quickly and probably identified that they were going to be the two hardest or the two biggest threats early on in the innings,” Finch told reporters.

After a slow start, India’s batsmen stepped on the gas, scoring more than 150 runs in the last 16 overs and singling out leg spinner Adam Zampa (0-50) for special punishment.

Finch said a poor start to Zampa’s spell gave the Indian batsmen an opportunity to get on top of him.

“..when you’re bowling to world class players and they get on top of you early it can be quite hard to come back, and for us not to be able to get wickets through that period as well, through the middle overs, he (Zampa) never had the chance to really bowl at a new batter a hell of a lot,” Finch said.

Set a commanding total of 352 runs, several frontline Australia batsmen had decent starts but none could bat deep enough as the five-time world champions, all out for 316 in exactly 50 overs, tasted their first loss in the tournament.

“I think India bowled really well with the new ball. I thought we could keep wickets then we could do some damage at the back end. But in the end we kept losing wickets at key intervals and when new batters come in the run rate keeps going up.”

Finch added that India’s seamers bowled to a plan and did not give any room to the Australian batsmen at the top of the order, particularly David Warner who scored at an unusually slow rate of 56 runs off 84 deliveries.

“They bowled nice and straight, back of the length, where the ball was just skidding quite low to start with and to myself as well. They just didn’t give us any width to get away or any length to really work with, either over the top or to get a drive away.”