Hope has been in tremendous form in the ongoing tri-nation series against Bangladesh and Ireland. 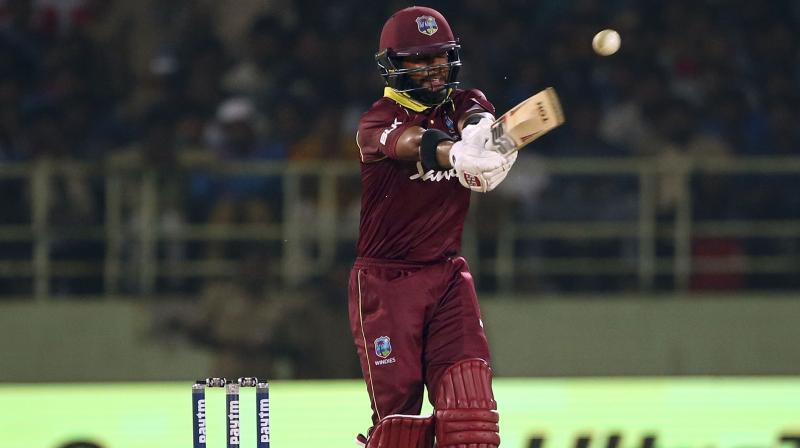 Hope recorded his career-best score of 170 runs in the opening match against Ireland and along with fellow opener John Campbell, he registered the highest ever ODI opening partnership of 365 runs. (Photo: AP)

Dubai: West Indies skipper Jason Holder on Friday lauded Shai Hope's consistency over the last two years and said that the player can become one of the best ODI players to ever play for West Indies.

"Shai has been our most consistent player over the last two years. He's the quickest West Indian to 2000 runs, which is a really phenomenal feat. I saw the list of guys on the TV and it's really good to have him in that company, and if he continues in that vein, he could be arguably one of our best ODI players to ever play," International Cricket Council (ICC) quoted Holder as saying.

Hope has been in tremendous form in the ongoing tri-nation series against Bangladesh and Ireland. The batsman recorded his career-best score of 170 runs in the opening match against Ireland and along with fellow opener John Campbell, he registered the highest ever ODI opening partnership of 365 runs.

Campbell missed out on the second match against Bangladesh, but Hope continued to keep his good form going, as he hit another century to allow West Indies to post a respectable total on the board.

West Indies lost the second match against Bangladesh, but Holder hopes that Campbell is fit enough to play in the next match of the Tri-nation series.

"Performances like that is something we're definitely looking for. John Campbell got a hundred in the first game, but unfortunately, wasn't fit enough to play the second. But hopefully, we can get him back on the park and firing on all cylinders once more," Holder said.

"I'm happy with how things have gone so far. I think the guys have been working really hard, they've been very disciplined. We probably weren't at our best in the last game, but we've had tons of discussions over the last couple of days as to how we can get better and how we can improve, which is what you want in a young group like this one," he added.

West Indies have the best net run rate among the three teams and a win over Ireland in their next match, will take them to a step closer to the tri-series final.
"I'm very positive that we can bounce back against Ireland, and when we play Bangladesh the second time around, we'll put up a much better performance," Holder said.

West Indies takes on Ireland in their next match of the tri-nation series on Saturday, May 11.