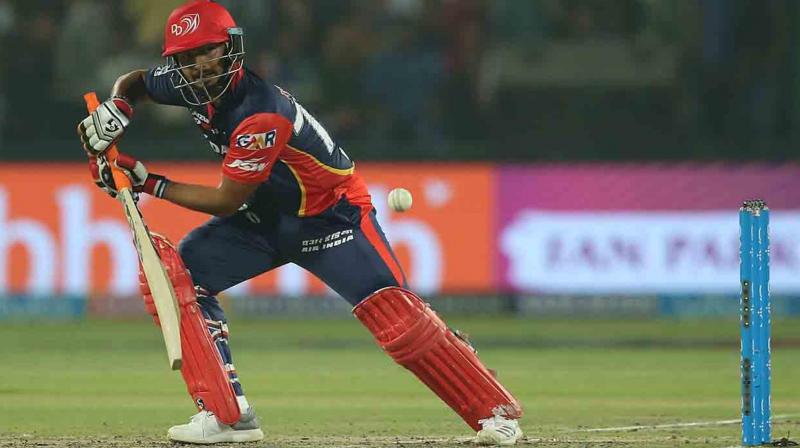 New Delhi: Rishabh Pant's sizzling show with the bat went in vain as Sunrisers Hyderabad outclassed the Delhi Daredevils by nine wickets at the Feroz Shah Kotla Stadium in New Delhi on Thursday.

Batting first, the hosts posted 187-5 on board after Pant smacked a ton but in reply, Shikhar Dhawan and Kane Williamson steered the hosts over the line.

The visitors lost Alex Hales early on, but from there the two batsmen took their time to settle and made sure they completed the job without any hassles.

LBW! Alex Hales gets the big fish. After two back to back boundaries, Patel traps the Englishman right in front of the stumps.

The table-toppers struck early in the power play as Shakib Al Hasan removed openers Jason Roy and Prithvi Shaw. Later on, Rishabh Pant was involved in run-outs of DD skipper Shreyas Iyer and Shreyas Patel that helped the visitors get back into the game.

However, young Pant carried on his fine form and smashed his first IPL hundred to swing the momentum back in favour of the hosts. Despite the departure of Glenn Maxwell in the death overs, Pant kept going to help his side post a respectable total.

CAUGHT! Back of a length by Bhuvi, Maxwell swings hard and doesn't connect well. Gets a top edge that heads straight to the man at long off.

RUN OUT! Oh Dear! Confusion at the crease again sees Harshal Patel being run-out this time. Things are heating up and the pressure in on Pant again.

SHAKIB STRIKES TWICE! Just the start the visitors needed as Delhi have lost two big wickets in the form on Jason Roy and Prithvi Shaw.

Preview: Kane Williamson-led Sunrisers Hyderabad (SRH) is on a roll in the Indian Premier League (IPL) this season, and are currently enjoying their life at the top of the points table.

Having won eight of the 10 matches (16 points), the 2016 champions have been known for defending low totals, thanks to their strong bowling attack.

On Thursday they lock horns with a low-on-confidence Delhi Daredevils (DD), who are currently lying in the bottom of the table with with six points.

DD have only won two of their last four matches in the IPL ever since Gautam Gambhir stepped down as the skipper, and Shreyas Iyer’s men will need to give it their best if they are to upset an all-round SRH.

Shreyas Iyer and Rishab Pant have been impressive for the Delhi franchise this season.

While Shreyas has aggregated 351 runs at a strike rate of 149.36 (four fifties), Pant has 393 runs to his name this season with three half-centuries.

Meanwhile, for SRH, Williamson will be the main man to watch out for.

The Kiwi batsman has scored 410 runs so far, with five fifties to his name.

The scare for DD will be the spin bowing trio of Rashid Khan, Yusuf Pathan and Shakib al Hasan.

The trio, along with pacers Bhuvneshwar Kumar and Siddarth Kaul have damaged the opposition’s batting at most times this tournament.

Delhi Dardevils have won the toss and decided to bat.

The match is scheduled to start at 8 P.M. IST on Thursday, May 10th.

The match will take place at the Feroz Shah Kotla, New Delhi