Despite being the 2nd highest scorer in domestic cricket, the Vidarbha batsman did not find a place in the India A squad that travels to England. 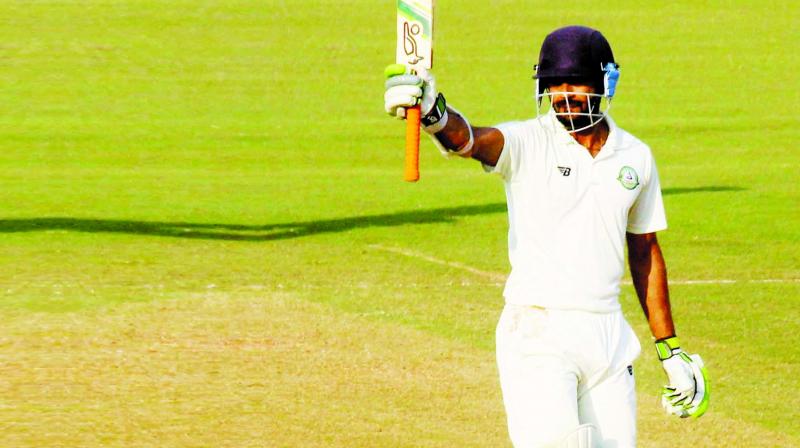 Rajneesh Gurabni’s magical spells in the latter stages of the tournament earned him a place in India A squad for four-day matches against England.

A run-of-the-mill Vidarbha team, which did not have the venom to clear the group stages of the Ranji Trophy, went on to lift the title by the end of the season. Going into every Ranji Trophy game as the underdogs against a variety of sides, which were definitely stronger on paper, each game was a challenge for  the team, which only improved with every encounter. But they found the grit to tame the giants and finally lift the trophy.

Rajneesh Gurabni’s magical spells in the latter stages of the tournament earned him a place in India A squad for four-day matches against England.

But while Gurbani was pocketing the wickets, it was skipper Faiz Fazal who managed the batting front. The Nagpur-born-batsman, who is currently playing in the English county league, finished the season as the second highest scorer with 912 runs in 12 innings. But that was not enough to earn him a place in the India A cricket side.“The best season of my career,” as he says, along with a Ranji Trophy and an Irani Trophy, had him believing that he stood a chance of returning to the national side, only to have his dreams dashed. “What can I say? I am very disappointed, there is nothing in my hand, is it?” he questions from London.

Faiz has had a taste of international cricket just once in his career. It was in 2016, when India was playing Zimbabwe and the opening batsman steered the team to a 10-wicket victory with KL Rahul, with a knock of 50. “It is going to be same in my career,” he says in a wounded tone.

Coach Chandrakant Pandit’s reaction to the squad selection went from happy to sad in a minute. He learned that Gurbani made it to the India A side but the Vidarbha skipper did not. “Faiz ka naam nahi aaya?” he asks. He feels that Faiz deserves a second chance at least in the India A side. “If you say that he is too old, then you should only select players under 25. Faiz has performed in a tremendous manner this year and the years that passed,” says Pandit expressing his discontentment with the decision.

Both of them have only partnered as coach and captain this season. However, the former Mumbai coach Pandit has been a fan of the left-hander for a while.

“He has only improved with time,” he says. “When he has already played for the national side in the past, then why can’t he play for India A. I am only questioning because I feel that he did well when the selectors gave him a chance (against Zimbabwe).”