The ten competing teams will play two matches each across four official host venues in England will not carry official ODI status. 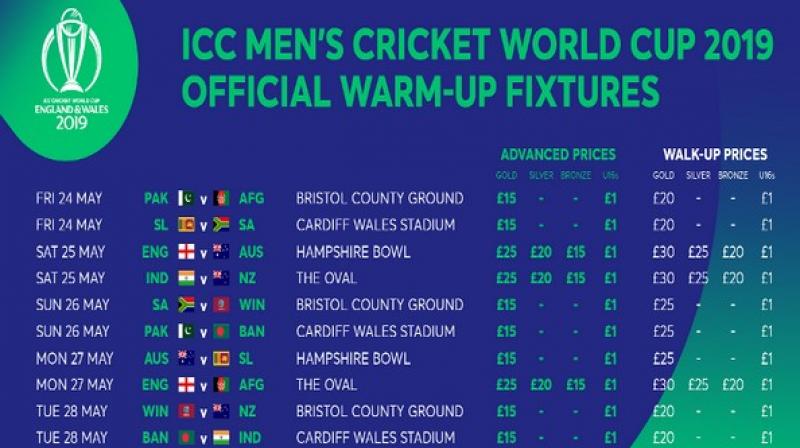 Dubai: Tickets for the warm-up fixtures, scheduled to be played May 24-28, ahead of the ICC Men’s Cricket World Cup 2019, will go on sale on April 10.

The prices for the matches start from as low as 15 pounds for adults and one pounds for under 16s. Tickets for seven of the ten warm-up fixtures will have a maximum advanced price of 15 pounds, while the top advanced price for any fixture is 25 pounds, ICC reported.

Fans will be able to purchase tickets on the Cricket World Cup 2019 Ticketing Site using their existing account details. Tickets will also be available at the venues on the day of fixtures, however, prices will be five pounds higher than pre-booked tickets, therefore, fans are advised to book their tickets in advance, the statement further said.

“With the exceptional demand we saw for Cricket World Cup tickets, we have made an effort to make ticket prices for these fixtures affordable to give families and unsuccessful ticket applicants another chance to be part of the world’s greatest cricket celebration, ICC Men’s Cricket World Cup 2019 Managing Director, Steve Elworthy.

“The warm-up fixtures provide the chance for fans to see the world’s greatest players on their doorstep, as they put the finishing touches to their plans for the tournament.”

These matches will be 50 overs per side, but will not carry official ODI status, as teams can field all members of their 15-man squad during the match.

The much-awaited World Cup will run from May 30 to July 14 with England and South Africa to play in the curtain-raiser at The Oval.