MI skipper Rohit Sharma said that Hardik pandya will be fit before the next game. He has also praised the young leg-spinner Markande. 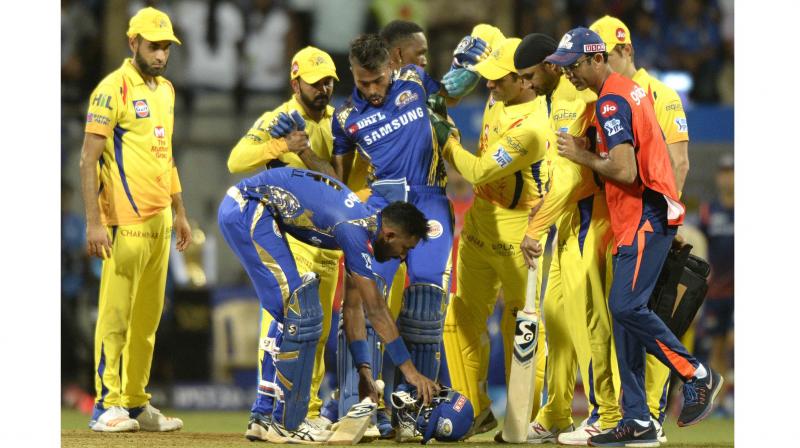 A few moments later, on the last ball, Pandya dashed into Bravo while completing a single and stayed on the ground for around five minutes suggesting that he has picked up a major injury. (Photo: Rajesh Jadhav)

In the season opener of the Indian Premier League where Mumbai Indians (MI) hosted Chennai Super Kings (CSK), a Dwayne Bravo yorker laced with venom in the last over of the first innings, landed right on the right ankle of Hardik Pandya. He illustrated a little discomfort then. A few moments later, on the last ball, Pandya dashed into Bravo while completing a single and stayed on the ground for around five minutes suggesting that he has picked up a major injury.

In an anti-climatic game, Hardik could not manage to send the ball into the stands like he does but showed his prowess when he had the ball.

The Indian all-rounder came on to bowl four overs and picked up three wickets but the nature of the sport is so demanding that one cannot tell if a player is shaking off an injury to guide their team to a win. However MI’s captain Rohit Sharma has clarified the situation telling that there is nothing major. “He twisted his ankle. He came and bowled four overs after that. We still have three days so I think he’ll be fine,” he said.

“I played him (Markande) in the nets a few times,” said Rohit who himself is a prolific hitter of spin bowling. “Leg-spinners give you a wicket-taking option in the middle and that I what exactly happened. He’s got great control on whatever he does. Going forward he will be a great weapon for us. For Mahela, and me we have to support this guy.”

Even after Hardik and Markande took three wickets each, it was MI and India’s death over specialist Jasprit Bumrah faced Bravo’s wrath in the final overs. Rohit is aware of his skill, as the duo is a part of India’s squad in all three formats. “He is a very strong character. He has played enough now to come back from these situations. He also knows that there is a lot of responsibility on him. He will still be our best bowler.’

Rohit along with Kieron Pollard launched new Adidas shoes AlphaBounce Beyond on Monday with actress Saiyami Kher with a long line of school kids waiting on the entrance of the store to get a small glimpse.

Polly’s 400
Kieron Pollard is a jolly fellow in the MI dressing and it is visible on the pitch with his on-field persona. He is happy with young players coming into the team. “The feel is confident. There are a lot of young guys in the dressing room. That’s what excites us the most. You watch a lot of young players-Ishank, Mayank, the Pandya brothers (Hardik and Krunal) as well shows that we have a lot of enthusiasm,” said the West Indian who was playing his 400th T20 game on Saturday donning kit number 400 for the same.

Coincidentally, Bravo had taken 400 T20 wickets entering into the game after which both of them decided to wear the number 400 on their respective kits. “Playing 400 matches in itself is a milestone. Next game we will where out respective numbers,” said Pollard.