Kings are back in citadel

Kedar Jadhav has been ruled out of the tournament. 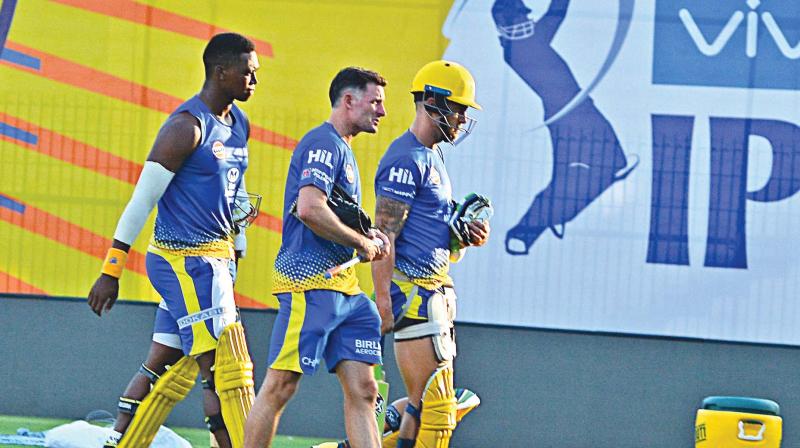 Team members of the Chennai Super KIngs at a training session on Monday. (Photo: E.K. Sanjay)

Chennai: The lions of Chennai —Super Kings — will be back in their lair, the M.A. Chidambaram Stadium, on Tuesday after a two-year absence. And, it will be an emotional homecoming for M.S. Dhoni & Co. when they take on Kolkata Knight Riders in their first home match of IPL-11. Security is expected to be watertight, as a handful of fringe groups have called for the cancellation of the match as a gesture of solidarity with Tamil Nadu on the Cauvery issue.

“Dhoni loves this team; it means a lot to him. We understand that it is going to be an emotional homecoming and we know Chepauk is going to be rocking tomorrow. We have to focus on executing our skills and not get caught up in the emotion,” said CSK batting coach Michael Hussey.

The men in yellow were off to a rousing start with a nerve-racking win over defending champions Mumbai Indians in the season opener on Saturday. It was a perfect riposte to doubters who called the team a spent force. Although most of the players are above the age of 30, CSK coach Stephen Fleming believes experience would be the key this season.

Hussey echoed the opinion of the Kiwi. “The best teams in the league have a good mix of experienced players and youth. I don't think age is a factor in a result. To my mind, the winners would be the one who can execute their skills under pressure,” the Australian added. According to Hussey, spinners of the two teams would have a role as the Chepak wicket is on the drier side.

Except for Dwayne Bravo, none of the CSK players really made an impact in the opener. As captain Dhoni has already stressed the importance of “horses for courses”, Chennai might test their bench strength before they zero in on their best XI.

Kolkata Knight Riders, on the other hand, will be high on confidence after making an easy meal of Royal Challengers Bangalore on Sunday. The home team must be wary of the threat posed by KKR opener Sunil Narine who can turn a match around in the span of a couple of overs. Captain Dinesh Karthik, a true blue Chennaiite, would be happy that his team’s batsmen pulled as a unit against RCB.

Jadhav out for season
All-rounder Kedar Jadhav who struck the winning runs against Mumbai Indians has been ruled out for the rest of the tournament with a hamstring injury. “He has a grade two tear. He is going to be out for some time. We haven't picked a replacement yet. It is a big loss for us because he is a key player,” Hussey said.

According to the Australian, Murali Vijay and South African Faf du Plessis are doubtful for the match. “Vijay took a bit of knock in training a couple of days ago. He is working his way to full fitness. Faf will not be available for selection against Kolkata. He could be fit for our third match,” he said.