After being put in to bat Bangladesh went to lunch at 127 for three, Bangladesh lost their last seven wickets for 84 runs. 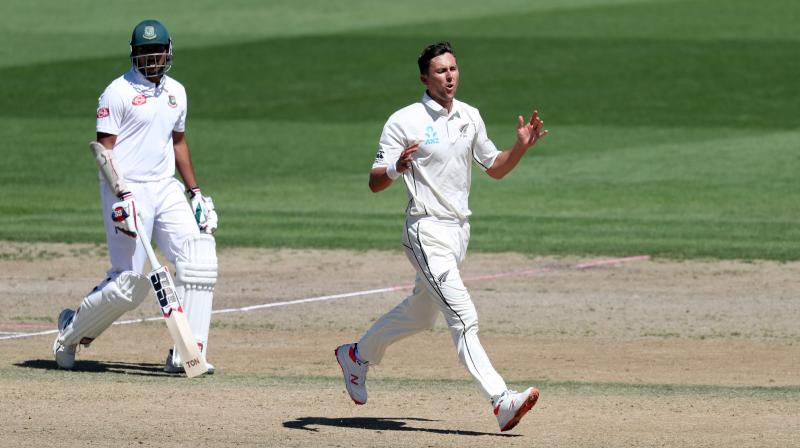 Wellington: An effective four-wicket spell by New Zealand's short-ball king Neil Wagner and three late wickets to Trent Boult saw Bangladesh all out for 211 in the rain-shortened second Test in Wellington on Sunday.

After being put in to bat after the first two days were washed out and going to lunch at 127 for three, Bangladesh lost their last seven wickets 84 runs in the middle session. Three of the dismissals, including the key scalp of Tamim Iqbal for 74, came in a sharp 13-ball spell from Wagner either side of lunch. Boult came back to destroy the tail with three wickets in nine balls.

Tamim had led a spirited start to the Test when the match finally saw some overdue action on the third morning, with the green wicket not holding the predicted demons.

He put on 75 for the first wicket with Shadman Islam and was unbeaten on 72 when Bangladesh went to lunch at 127 for three. But he only had time for two quick singles after the resumption before his touch deserted him and an attempted pull shot was top-edged to Tim Southee at leg gully.

In his last two overs before the end of the first session, Wagner removed Mominul Haque (15) and Mohammad Mithun (three) with both batsmen gone on the first ball after successfully reviewing a caught-behind decision.

The pre-match talk had centered on the green wicket but the look proved deceptive as New Zealand's new-ball pair Boult and Tim Southee were unable to generate much swing or effective seam movement.

Tamim's opening stand with Shadman (27) was their third fifty partnership in as many innings against New Zealand. It took the introduction of medium pacer Colin de Grandhomme to split the pair when Shadman was caught at first slip.

Tamim and Mominul Haque (15) added 44 for the second wicket to have Bangladesh 119 for one before Wagner's short-ball specials took effect and five wickets fell for 49 runs. While Wagner did not get extreme height he did expose an indecisive approach by the batsmen.

Mominul and Mithun (three) were caught off edges down the leg side while captain Mahmudullah (13) took a ball angling over off stump and turned it to the midwicket fielder.

Matt Henry claimed the wicket of Soumya Sarkar who also tried to pull a ball heading towards off stump and was caught behind the wicket by BJ Watling. Wagner finished with four for 28 while Boult's late burst gave him figures of three for 38.