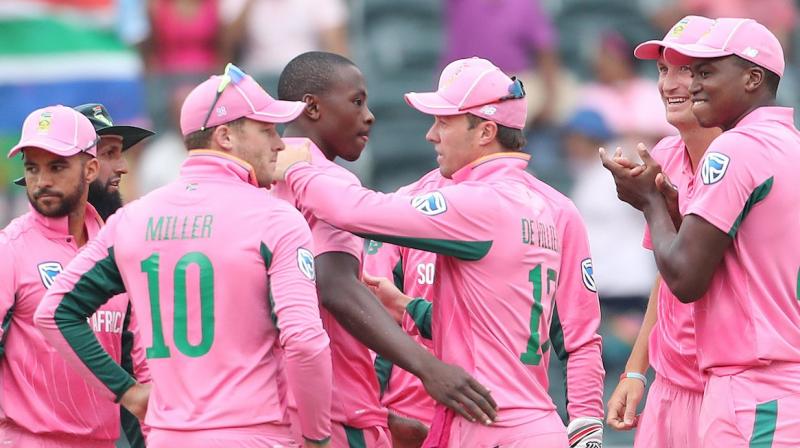 It was a team effort from Proteas that helped them register a comprehensive win. (Photo: Twitter / BCCI)

Johannesburg: South Africa scripted a comprehensive 5 wicket victory against India in the 4th ODI of the Momentum Series at the SuperSport Park on Saturday to keep the six-match series alive.

Electing to bat first,  Virat Kohli and Shikhar Dhawan stitched together a century stand to put India in control. Virat Kohli scored 75 runs, while Dhawan went onto to complete his century as he scored 109 runs . Some late flourish from MS Dhoni (42 not out in 43 balls) helped India reach 289 /7 in 50 overs.

In the 2nd innings Proteas began the chase on cautious note as stand in skipper Aiden Markram and Hashim Amla played cautiously. Markram was the first to be dismissed by Jasprit Bumrah who trapped him LBW for 22 runs.

AB de Villiers who made a comeback into the side after missing out on first three games, looked to take the game away form India with quickfire 26 runs. He was ultimately dismissed by Hardik Pandya to give India the chance to win the game.

David Miller and wicketkeeper batsman Heinrich Klaasen launched counter attack on spinners Yuzvendra Chahal and Kuldeep Yadav as they kept on hitting them for more than 15 runs in over.

Miller, who twice got lifeline was finally dismissed by Chahal for 39 runs, bringing an end to 72 run stand.  Andile Phehlukwayo who came after Miller’s dismissal smashed quickfire 23 to win the game for Proteas. Klassen remained not out on 43 runs of 27 balls to rightly earn man-of-the-match award.

The two teams will now lock horns in Port Elizebeth for the 5th ODI on Tuesday.

Klaasen and Phelukwayo ensure that South Africa win the match without much trouble. A fantastic chase to the rain curtailed game.

WICKET! Who else Kuldeep Yadav strikes after rain break, Duminy coming down the track but failed to connect. The ball gets wrapped on pads as umpire raises the dreaded the finger. debatable decision

After heavy showers stopped pouring down, the match finally resumes with South Africa chasing revised target of 202 in 28 overs

We're back on the park after that rain delay and we have some revised conditions too. It's a 28-over chase with a new target of 202. It means SA need another 159 runs off 124 balls #PinkODI #SAvIND #MomentumODI pic.twitter.com/IWtGkpPLxj

Good news! The umpires have taken a close look at the ground conditions and the game will be resumed shortly. Match reduced to 28 overs and the revised target 202

Update - The umpires have taken a close look at the ground conditions. Play set to resume from 20:30 local time. Match reduced to 28 overs. Revised target 202 #SAvIND

Here's the latest update on 4th ODI between South Africa and India. The next pitch Inspection will take place at 11:40 PM

WICKET! Jasprit Bumrah strikes gets the wicket of Aiden Markram for 22 runs. The South Africa stand-in-skipper goes for review but the decision stands. Poor call from the skipper.

South Africa bowlers did good job to restrict India to 289/7 in their full quota of 50 overs in the fourth ODI at Wanderers in Johannesburg.  India looked like posting big total after Shikhar Dhawan and Virat Kohli put on century stand, but the home team pulled things back after the lightning break to restrict India.

Rohit Sharma once again failed to score with the bat as he was dismissed  for just five runs. Rabada, who was bowling the over, went low down on the run to take a fantastic catch.

Skipper Virat Kohli who has been in sizzling form along with Shikhar Dhawan then steadied the Indian innings as both the batsmen put on 158-run stand to put Men in Blue in strong position.

While Dhawan went onto complete his century, Kohli was dismissed for 75 runs by Chris Morris denying him yet another century just before the lighting interrupted the play.

After the break South Africa fought back with two important wickets of Shikhar Dhawan (109) and Ajinkya Rahane (8). With new batsmen at the crease, the bowlers made it difficult for the visitors.

Stand in skipper Aiden Markaram pulled off stunning one handed catch to dismiss Hardik Pandya. In the end MS Dhoni 42 runs (played a cameo) in the end  to help India put up fighting total.

WICKET! That was a stunning catch by stand-in skipper skipper Aiden Markram. A one handed effort to dismiss Hardik Pandya

WICKET! Shreyas Iyer departs for 18, Ngidi strikes. After hitting the first ball foro boundary, he tries another go at the bowler only to find Chris Morris at Long on

Shreyas Iyer survives caught behind appeal. The keeper went up immediately and even the umpire raised his finger in a flash. But, Iyer has decided to review. Fair delivery. UltraEdge confirms no edge. The onfield call has been reversed.

Two quick wickets after the break has certainly brought SOuth Africa back  in the game as flow of runs began to dry. SHikhar Dhawan who scored centiry before the break was the first to go and then AJinkya Rahane also departed without troubling the scoreboard.

First it was Dhawan and now Ajinkya Rahane dismissed by Ngidi for 8. Double blow for India. Short ball by the bowler, Rahane goes with the pull shot only to find Rabada at deep square leg.

The break seems to have worked for South Africa, Morne Morkel strikes as he removes Shikhar Dhawan .

BAD NEWS! Lightning stops play at the Wanderers as players and umpires walk off the field. After losing Rohit Sharma early, India are in a pretty good position as Virat Kohli and Shikhar Dhawan put up 158 run stand for the second wicket.  Kohli missed out on his ton, Shikhar Dhawan managed to get to the three figure mark in his 100th match.

WICKET!!! @Tipo_Morris back into the attack and he strikes immediately by removing SA's thorn of recent times, Kohli, for 75. It's 178/2 (31.1 overs). Dhawan has 90* as the players take drinks #ProteaFire #PinkODI #PitchUpInPink #SAvIND pic.twitter.com/pvtMCcd3IB

WICKET! This is a big blow for India, Virat Kohli dismissed for 75 by Chris Morris. It was a back of length delivery, Kohli tries to play over covers but ends up giving catch to David Miller

Shikhar Dhawan is just 11 runs away from scoring a century. after failing to make huge scores in the first three ODI's, the Delhi cricketer has finally found his groove on his 100th ODI.

This is turning out to be yet another Dhawar-Kohli special. The left and right hand combination is going strong and making things difficult for South Africa bowlers

The 50 is up for Kohli now as India progress to 127/1 in the 22nd over of the #PinkODI. Dhawan is on 65* #PitchUpInPink #SAvIND pic.twitter.com/eOnFpHClHW

Shikhar Dhawan completes his 26th ODI fifty as India take control of the match. Dhawan alongside Kohli have managed to put on  run partnership in put the team in strong position

Virat Kohli(34 runs) and Shikhar Dhawan(45 runs) have put on 71 run stand between them to steady India innings after losing Rohit Sharma early.

50 up for India! Rohit's early departure yet again has made not much of a difference as Kohli and Dhawan continue steady India innings.

50 up for India! Rohit's early departure yet again has made not much of a difference as Kohli and Dhawan continue steady India innings.

Rohit Sharma's poor form with the bat continues as he departs early for just 5 runs. Kagiso Rabada yet again providing the opening breakthrough for the Proteas

WICKET!  Kagiso Rabada with an early  breakthrough for South Africa removing Rohit Sharma yet again. The Length ball bowled by Rabada took edge of Rohit 's bat and scooped straight back into his hands.

Johannesburg: Virat Kohli wins the toss for the second time in the series and decides to bat in the fourth ODI at New Wanderers stadium  in Johannesburg .

India, who played the same side for the three games decided to make one change in the playing eleven with Kedar Jadhav making place for Shreyas Iyer who will be playing his 1st ODI in South Africa.

Shikhar Dhawan will be playing his 100th ODI for the team

South Africa made two changes to the side, The proteas dropped leg spinner Imran Tahir from the side and brought in Morne Morkel, while AB de Villiers, who missed the first three ODI's due to injury makes comeback into the side to boost the batting lineup .

India have made one change in the playing XI with Kedar Jadhav making way for Shreyas Iyer.

South Africa have made two changes to their playing XI with AB de Villiers coming in for Zondo and Morne Morkel coming in for Imran Tahir.

Good afternoon and welcome to the #PinkODI. A big day for SA coming up. @ABdeVilliers17 is back to #PitchUpInPink. Can the #ProteaFire be reignited and SA stay alive in the series? #SAvIND #MomentumODI pic.twitter.com/qPODfBk7R5

Johannesburg: Having dominated the opposition so far in the Momentum ODI series, India will look forward to clinching their first-ever series on South African soil when the two nations lock horn in the fourth ODI at Johannesburg on Saturday.

On Wednesday, Virat Kohli and co took an unprecedented lead in the six-match series with a thumping 124-run victory against South Africa in the third ODI at Newlands, Cape Town. And now, the Men in Blue will eye history after losing the Test series earlier.

During their 2010-11 tour of the Proteas, India were caught in a similar situation, leading the ODI series 2-1 under MS Dhoni, but the hosts bounced back to eventually clinch the five-match ODI series 3-2.

A victory will also help the visitors topple the Proteas to bag the number one stop in the ICC ODI team rankings. South Africa, on the other hand, will be boosted with the return of AB de Villiers, who suffered a finger injury in January that saw him ruled out of the first three ODI matches.

Though Faf du Plessis and Quinton de Kock still remain on the list of casualties, the return of de Villiers will add much-needed solidity to their batting line-up, who have faltered so far against the spin duo of Yuzvendra Chahal and Kuldeep Yadav.

Where to watch the match live?

What time will the match start?

The match is scheduled to start at 16.30 pm IST