Australia will play a three-match ODI series against India starting January 14 in Mumbai. 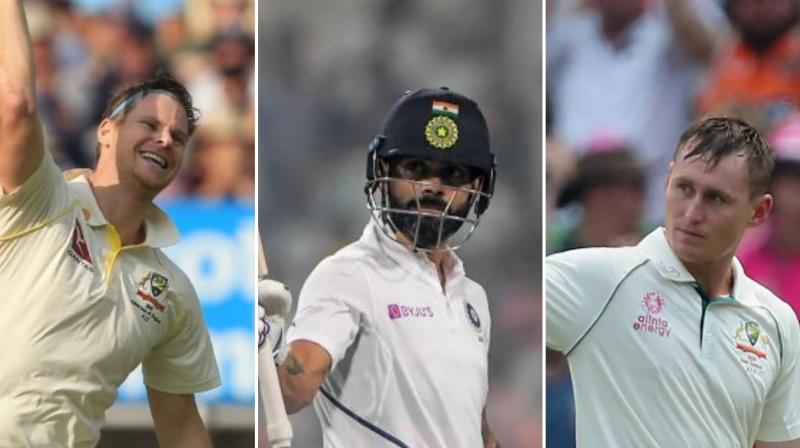 In-form Australian batsman Marnus Labuschagne says he considers the upcoming ODI series against India a big opportunity in his quest to emulate Virat Kohli and Steve Smith across all formats. (Photo:AFP)

New Delhi: In-form Australian batsman Marnus Labuschagne says he considers the upcoming ODI series against India a big opportunity in his quest to emulate Virat Kohli and Steve Smith across all formats.

The 22-year-old right-handed batsman scored back-to-back Test centuries against Pakistan and another ton and a double hundred against New Zealand in the summer before embarking on the ODI tour of India where he will find out whether he makes his shorter-format debut or not.

Labuschagne, who can be handy with his leg-breaks, says long-term consistency across formats would be his major goals for the future.

"You look at the guys I look up to and aspire to -- Steve Smith, Virat Kohli, Kane Williamson, Joe Root. They've been doing it for a very long time, five, six years they've been consistent, not just in one format, but two or more formats," Labuschagne was quoted as saying by 'ESPNCricinfo'.

Australia will play a three-match ODI series against India starting January 14 in Mumbai. The team landed in the country on Thursday night.

"...I've had some success this summer but the real challenge for me is to be more consistent going on and being able to keep putting continued performances on the board. If I can continue to do that, then that's obviously going to be the challenge for me," said Labuschagne who has scored 1459 runs from 14 Tests.

Having got his first chance to be in the white ball squad, he said the one-day series in India would be an opportunity to show a slightly different aspect of his game.

"...that's a really exciting challenge too. It's going to be tough conditions in India and they're obviously a very strong side. So just about enjoying the challenge and not getting too far ahead of yourself, taking it ball by ball and game by game," he said.

"A big part of playing in India is how you play spin, so for me being clear with my plans about how I play spin and then just trusting the processes I have.

"Batting in the middle order it's about running really hard between wickets and trying to get those runs through the middle, then when you get the opportunity towards the back end to open the shoulders a bit."

Labuschagne said would like to follow the path of former Australia batsman Michael Hussey as far as adapting to different conditions is concerned.

"With the opportunities that might come in the next few months, we'll have to see, but definitely Michael Hussey is a great person to learn from," Labuschagne said.

"The way he played the one-day game, the way he finished off the innings and the way he probably started his innings. There are a few similarities there, but I'm definitely not comparing myself to Michael Hussey."

If he gets a chance to make his ODI debut in India, Labuschagne may play a somewhat different role than his preferred No.3 spot.

With Aaron Finch, David Warner and Smith seemingly confirmed for the top order, Labuschagne, Peter Handscomb, Alex Carey and Ashton Turner may be tried in the remaining spots.

"Whatever role I'm given is one I'm going to try and keep. If that's batting in the top four or even outside the top four, whatever that is.

"The whole one-day game's moved in that more aggressive, positive direction, but I've been lucky I've been able to move with that and play in this era where one-day cricket is a really high scoring game."