Australia need to play to their strength: McGrath

McGrath said Virat Kohli was the obvious choice for captaincy role when M.S. Dhoni decided to step down. 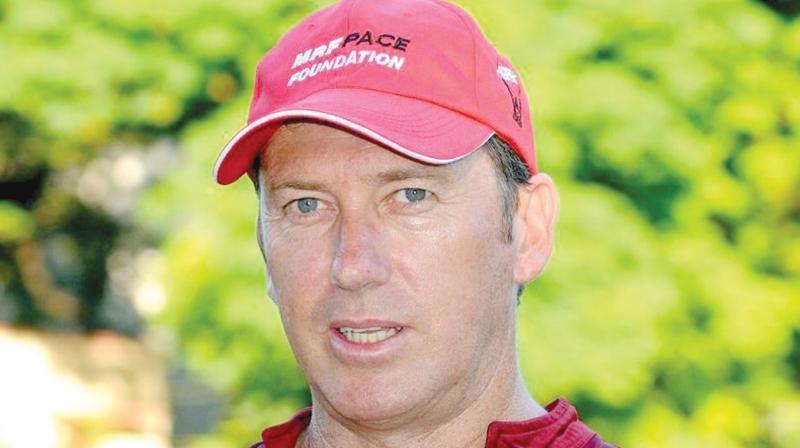 Chennai: Before every Test series in India, the talks invariably revolve around the spinners; the quality of home bowlers and the lack of it from the opposition camp. The role of fast bowlers is generally underplayed. Aussie great Glenn McGrath believes pacers, too, can win matches in India and he cited the example of his country’s famous 2-0 series victory over India in 2004. It was the last time Australia won a Test (at Nagpur) in India. The pace duo of McGrath (14 wickets in 4 matches) and Jason Gilliespie (20 in 4) were central to the landmark result with Shane Warne only playing second fiddle.

As Australia are set to announce their squad for next-month’s eagerly awaited India tour, McGrath said Steve Smith & Co. have to play to their strength - which is fast bowling. “A pacer who can bowl good reverse swing will be dangerous here. The way Mitchell Starc bowled in Sri Lanka was pretty amazing. Australia need him on top of his game. When Starc bowls his best, he effortlessly clocks 150kmph. He also uses short-pitched deliveries to good effect. Josh Hazelwood is also performing incredibly well. He is confident. I hope he takes some wickets with the new ball and once the ball gets old he can definitely reverse it,” said McGrath, who took 33 wickets in eight Tests in India.

McGrath said Australia’s bench strength when it comes to pace battery has always been a concern as they are, more often than not, mired in injury problems. “It will be nice to have Pat Cummins and James Pattinson bowling at their best in India. Jackson Bird did a good job coming into the side. Some of the other guys are, however, far away. It’s fair enough that workload is an issue. If they ask me to rest, I wouldn’t be too happy,” said McGrath.

With the series sweep over Pakistan, Australia have made a quick turnaround from one of their worst summers. “After losing the Hobart Test against South Africa, we were staring at one of our lowest points in Aussie cricket. A lot of changes had to be made. But since then, they haven’t lost a Test. Young guys who came in are having a positive influence on seniors such as David Warner and Steve Smith,” he said.

McGrath said Australia have to find ways to combat India’s spin attack. “I don’t think we have worked out how to play spin here. We make the same mistake of either going too aggressive or too defensive. The batsmen who can play sweep shot will do well here. Matthew Hayden didn’t play spin well before he made a sincere effort to learn before the India series in 2004,” he said.

McGrath said Virat Kohli was the obvious choice for captaincy role when M.S. Dhoni decided to step down. “It was just a matter of time. If a captain of the Test team is playing ODIs and T20s as well, I think it makes a lot of sense to have the same person at the helm in all formats,” he said.