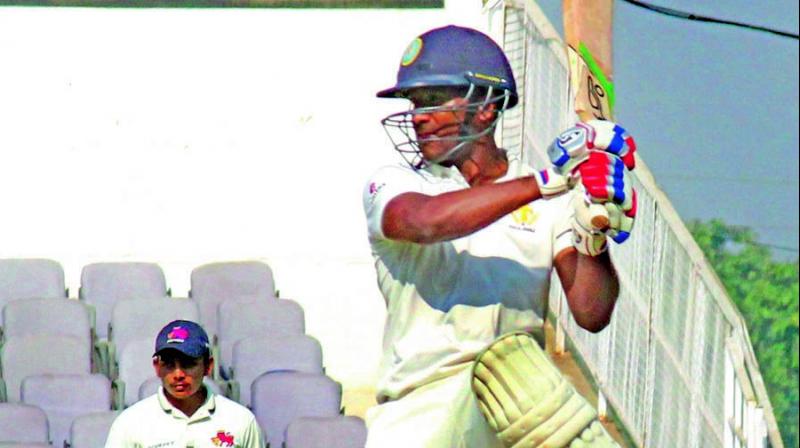 Nagpur: Karnataka took control of their Ranji Trophy quarter-final against Mumbai by taking a commanding 222-run lead over the 41-time champions on day two of the five-day game at the VCA Stadium in Jamtha on Friday.

Half centuries by opener Mayank Agarwal, M. Kaunain Abbas, C.M. Gautam and Shreyas Gopal helped Karnataka to the dominating position as they closed out the day at 395/6 in 122 overs with Shreyas Gopal unbeaten on 80 off 151 balls along with skipper R Vinay Kumar (31 not out).

Karnataka had on Thursday bundled out Mumbai for a partly 173 and finished the opening day at 115/1.

Agarwal, who is the top run getter this Ranji season, made 78 off 104 balls, striking 11 fours and a six while one down Abbas (50), Gautam (79) and Shreyas played their roles to perfection.

Debutant right arm medium pacers Shivam Malhotra, who grabbed the wicket of Agarwal this morning, and Shivam Dube (5/79) were the wicket takers for Mumbai.

In fact, the two first-timers took four wickets in good time to leave Karnataka at 218/5 and the game in balance before the batting side recovered through two big partnerships for the sixth and seventh wickets, with Shreyas Gopal involved in both of them.

Shreyas, unbeaten after facing 151 balls and hitting seven fours, put on 103 runs with keeper Gautam to steady the innings. Later, he added 74 runs with skipper Vinay Kumar, who took six wickets on Thursday including a hat-trick, for the unfinished seventh wicket to put his team on top and for Karnataka to press on further on Saturday.

Meanwhile, Harpreet Singh struck a gritty hundred to lead Madhya Pradesh’s fightback before Delhi came up with a strong reply to leave the Ranji Trophy quarter-final nicely poised at stumps on day two. MP, resuming the day at 223/6, did extremely well to reach 338 with Harpreet scoring an unbeaten 107 off 200 balls. The tail too gave him good support, especially Puneet Datey (35).