Ind vs Eng: Keaton Jennings scored a century on debut

India fight back in final session to take three wickets. 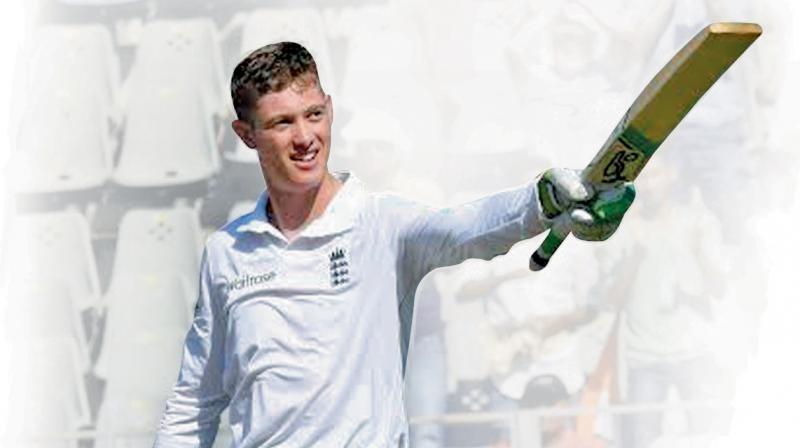 Debutant Keaton Jennings raises his bat after scoring a century on his debut.

Mumbai: Ravichandran Ashwin (4/75) dashed England’s hopes of a revival in the five-Test series as India restricted the Alastair Cook-led side to 288/5 despite debutant Keaton Jennings’ hundred (112) on Day One of the fourth Test here on Thursday.

England, who elected to bat, made two changes to the team with Jake Ball and Jennings replacing Gareth Batty and the injured Haseeb Hameed in the XI. India, who had their share of injury issues, brought in Bhuvneshwar Kumar for Mohammed Shami after the latter complained of a sore knee following the Mohali Test. Lokesh Rahul, who was declared fit after missing the third Test due to forearm injury, was brought back as well.

England, after unwinding in Dubai following defeats in Vizag and Mohali, looked to have revived their spirits as they enjoyed a solid start courtesy a 99-run opening stand between Jennings and Cook. While there were a couple of unplayable deliveries from Ashwin and Jayant Yadav, there were no real demons in the pitch as the England duo thwarted Indias’ bowlers in the first session.

England would have enjoyed lunch even more had it not been for Cook’s dismissal. Ravindra Jadeja, bowling his first over, had Cook (46) stumped after the England skipper’s uncharacteristic dance down the track, just before the break, went wrong. This was only the fourth time in his 235 dismissals that England’s highest run-getter in Tests, was out stumped.

Joe Root was the next man to get out after Virat Kohli, despite moving to the wrong side, took a fine catch in the slips off Ashwin’s bowling. The Yorkshireman could only score 21 as India did not have to wait for too long to get their first wicket in the post lunch session.

Moeen Ali, despite being tested by the spinners, and Jennings kept the scoreboard ticking following Root’s wicket. With 230 on the board and eight wickets still in hand, it was clearly advantage England until Moeen (50) succumbed to a miscued sweep shot off Ashwin.

The Indian tweaker scalped one more in the same over after Jennings, who was flawless in his 219-ball knock, was brilliantly caught by Cheteshwar Pujara at gully.

From 230/2, England were reduced 249/5 after Jonny Bairstow (14), perhaps England’s best batsman in Tests over the last 12 months, became Ashwin’s fourth wicket after hitting one straight into the hands of deep backward square-leg.

Ben Stokes (25 not out) and Jos Buttler (18 not out) made sure India did not enjoy any more success in the final session. However, Kohli and Co. will be a happy bunch going into Day Two after a three-wicket third session on the day.