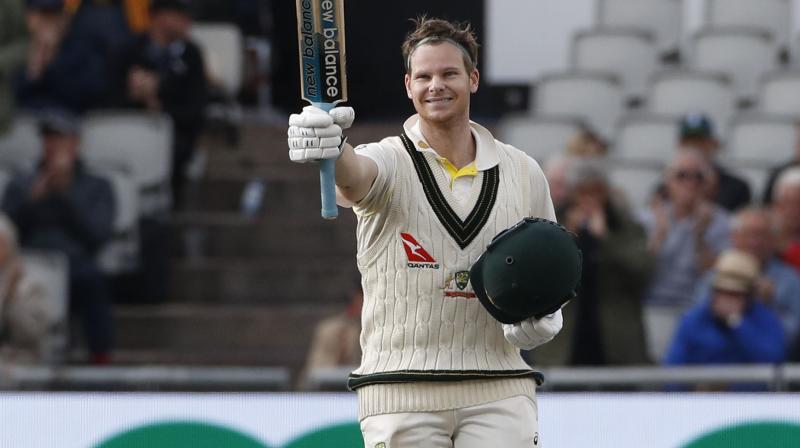 England skipper Joe Root identified Australia batsman Steve Smith as the standout performer in the ongoing Ashes and said if the batsman is taken out of the equation, the situation would be very similar for both teams. (Photo:AFP)

Manchester: England skipper Joe Root identified Australia batsman Steve Smith as the standout performer in the ongoing Ashes and said if the batsman is taken out of the equation, the situation would be very similar for both teams.

"If you take Steve Smith out, it would be very similar for both teams. It has been a series dominated by the ball. Both batting sides have very experienced players who have not performed how they would have liked and that tells a story by itself," ESPN Cricinfo quoted Root as saying.

"Bowling at Smith in this form is difficult and you have to make sure you take all your chances. We did not do that and that cost us. The teams have put all batters - bar Smith - under pressure and it has been challenging. But I have to find a way of scoring runs. You have to look at areas you want to get better both in yourself and as a team," he added.

Thirty-year-old Smith, who scored 82 runs in the second innings of the fourth Test of the ongoing Ashes on Saturday, has been having an exceptional series. He has amassed 671 runs and has become the second-fastest batsman to register 26 Test centuries.

In the first innings of the match, he scored a double ton, enabling Australia to post 497 on the board.

In the second innings, Australia was in a spot of bother at 44/4, but Smith played a vital 82-run knock to enable the side to declare at 186/6, setting England a target of 383 runs.

In the final innings, England's wickets kept on falling at regular intervals but Australia had to toil hard to take the final two wickets.

Australia had to toil hard for taking the last two wickets of England and skipper Root lauded his team for the fight they put up on the final day of the match.

"I thought the guys fought extremely bravely. They dug in, they fought and they put a high price on their wicket. It almost makes it a little bit harder to take but, at the same time, I could not be more proud with how we fought today," Root said.

"It is tough to take, losing the Ashes. It is bitterly disappointing. But when you find yourself in a situation like today you learn a lot about your team and the guys. I thought everyone showed a lot of courage, resilience, and character. Everyone should be really proud about how they approached the day," he added.

Despite the loss in the Test, Root said he still wants to continue as the skipper.

"I definitely want to carry on as captain. I have been given a fantastic opportunity to captain the Test side and will continue to work very hard at doing my best at that," Root said.

England and Australia next face each other in the final Test, beginning September 12 at the Oval.