The Proteas will be playing three T20s starting September 15 followed by three Tests against India. 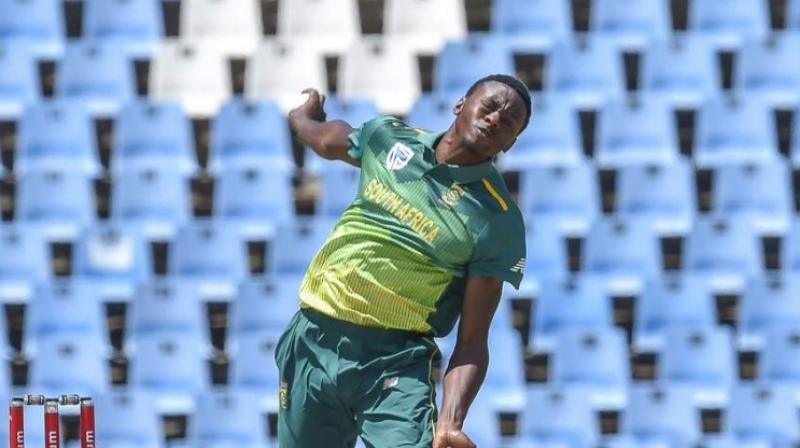 South Africa's pace spearhead Kagiso Rabada feels the upcoming T20 and Test series against India is a chance for his embattled team to figure where it stands against the world's best in a tough transition journey. (Photo:AFP)

New Delhi: South Africa's pace spearhead Kagiso Rabada feels the upcoming T20 and Test series against India is a chance for his embattled team to figure where it stands against the world's best in a tough transition journey.

The Proteas will be playing three T20s starting September 15 followed by three Tests against India. They arrived with a relatively young team in which Rabada and skipper Quinton De Kock are the two most experienced players.

"I am really looking at the next couple of years. It's a challenge for us, it's a journey. The group has belief in its abilities and we need to see how we fare on this tour of India," Rabada told PTI in an exclusive interview.

The tour of India is South Africa's first assignment since a disastrous World Cup campaign, during which they were knocked out in preliminary stage itself. India are the numero uno team in the ICC Test rankings but are placed a rung behind South Africa, at 4th, in the T20 list.

"The goal is to compare ourselves with the best. India have been a successful team over the years. There's been some changes and our team is now a lot younger. It's a challenge for those who haven't played here earlier," acknowledged Rabada, who has already played over 100 international games across formats.

There is no Faf du Plessis (unavailable), Imran Tahir and Hashim Amla (retired), Dale Steyn (not picked) in a side which can be termed lean on experience. Rabada would rather focus on the positives.

"You need to look at the transition phase in a positive way. I am glad that I am playing with guys that I have played at school at the age group level and that's fascinating for me," the 24-year-old said.

Rabada also shares a comfort level with interim coach Enoch Nkwe, having been under his wings at the age-group level.

"I have been involved with him since the age group level. I like the way the team is gelling," said the soft-spoken pacer in an interaction which was organised by Sun International hotels represented by Outbound Marketing in India in collaboration with the South Africa High Commission.

Despite the lack of experience, Rabada said there is a belief that the visitors can win against the formidable hosts.

"There will be a few debuts. Players who have not played against an Indian team, especially such good quality. We are going to see where we are at here. We believe we are going to win. Its exciting and we are going to have fun," he exuded confidence.

One of the biggest challenges for the likes of Anrich Nortje, Junior Dala, Beuran Hendricks and Andile Phehlukwayo would be to devise a strategy to get rival captain Virat Kohi out.

Not an easy job by any means but Rabada wants to keenly watch how some of the juniors respond to the Herculean assignment.

"Virat Kohli has proven that he is the best batsman in white-ball format. He is already regarded as a great of the game with some pedigree. Playing him is an opportunity to test yourself as a player.

"I think he is a fighter and at the end of the day, we would like to go and express ourselves and not have any fear. Have fun, play hard and just enjoy the battle with the world's best batter," was Rabada's simple advice for the rookies in the team.

"I mean it's good. I have always admired watching other fast bowlers and it's healthy competition, it's good that they (Bumrah and Archer) are around," he said.

"Like I said, the natural competition is healthy. It's a spectacle to see someone running in and bowling rockets. A great spell with skill and execution is all you want to see," he concluded.